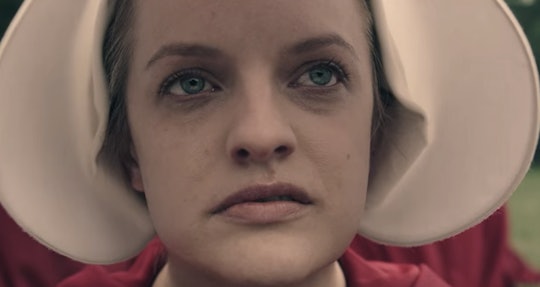 The New Trailer For ‘The Handmaid’s Tale’ Is Scary

On Thursday, streaming network Hulu dropped its new trailer for The Handmaid's Tale, the new show based on Margaret Atwood's chilling dystopian novel about the fall of society to totalitarian ideals and leaders, while oppressing women through forced reproductive subjugation. Sound familiar? Yeah, this new trailer from Hulu — starring Mad Men's Elizabeth Moss as the protagonist Offred — hits a little too close to home given the current political climate and the debate over health care, especially regarding women's rights and access.

Even though it was written more than 30 years ago, Hulu's spot-on adaptation feels like it could have been written yesterday. Case in point? On Wednesday, a group of bold Lone Star State women dressed as characters from The Handmaid's Tale to protest anti-choice bills before the Texas state senate. They sat quietly in the gallery and held up signs while wearing red robes and white bonnets. As the latest The Handmaid's Tale trailer shows, this Hulu's original production truly demands a confounding question of viewers: Does art imitate life? Or vice versa?

Let's take a close look at the trailer and break it down, shall we?

The End Of Democracy

The new trailer for The Handmaid's Tale opens with a voiceover by Moss, who sets up the exposition for the story in just five chilling sentences that seem especially prescient given Wednesday's attack on Parliament:

As Moss's character is forced to leave her job, because "it's the law now" as her boss says, she sees a group of protesters holding signs saying things such as "A woman's choice is a woman's voice!" and "Enough is enough" and "Stop violence against women." All that's missing from the crowd? A sign that reads "Dump Trump."

Women Won't Back Down

As Offred faces the wrath of Aunt Lydia when she goes too far in remembering her Scripture as instructed, it's a powerful testament to the women who won't back down in the face of opposition and oppression in Atwood's book. Ever since the Women's March on Washington — and around the globe — this scene resonates that much more deeply.

Check out the entire trailer for yourself.

The Handmaid's Tale will begin streaming on Hulu on April 26.

More Like This
The New Avatar Movie Will Tell A Family-Centric Story & It Looks Amazing
A Father Of The Bride Remake Is Coming To HBO Max This Summer
24 Photos Of Princess Charlotte Making Silly & Cute Faces
Jennifer Lawrence Just Kinda, Sorta Revealed The Sex Of Her First Baby