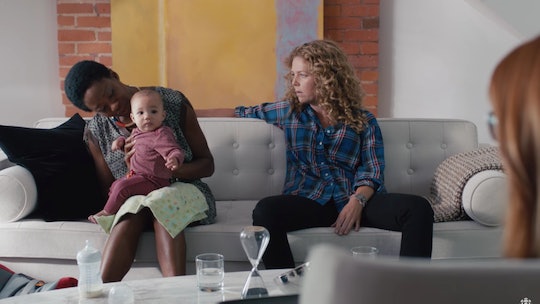 Workin' Moms became an instant international hit when Season 1 dropped on Netflix after being only available in Canada. The first season is 13 episodes, but more relatable mom moments are always good, right? So, I know you want to know how many episodes Workin' Moms Season 2 is. Fear not, I have an answer.

More episodes of Workin' Moms in Season 2 would have been nice, but the same amount is nothing to be mad about. Season 2 of the show is also 13 episodes. Fans aren't getting less of Kate, Frankie, Jenny and Anne and that's what matters.

In the first season of the show, creator Catherine Reitman set out to create a layered and authentic portrayal of motherhood — one that wouldn't shy away from tough and often messy topics like postpartum depression or the practical realities of trying to pump breast milk while in the office. The show's first 13-episode season aired on Canada's CBC network, and was soon renewed for a second — which American audiences can now stream on Netflix. Back in Canada, the show's third season just wrapped up and it has even been renewed for a fourth so obviously people are into this.

The first season ended with Kate still struggling to find exactly the right balance between being a mom and succeeding at work (as if such a thing exists). In the second season, Kate has to deal with the repercussions of choosing family over work. Hey — nobody said being a working mom was going to be easy.

But in an interview with Romper following Season 1's premiere on Netflix, Reitman says that the whole point of the show is to let women know that it's OK to not be thrilled with motherhood at all times. "The point of the show initially was to show the lighter side of the darkness that so many women feel when they become mothers," she says.

And based on the fact that the series shows no signs of slowing down any time soon, it looks like a lot of women appreciate the message it is telegraphing. In another interview with Access Hollywood, Reitman explained, the pressure to do what you think you are expected to as a mother is real. "We're getting judged constantly, aren't we?" she said. "Whether we're failing or succeeding. If you succeed too much you're unrelatable."

While the first season covered the first months of a woman's new life as a mom, the second season takes on the dreaded toddler years. "We really went there," Reitman told HuffPost Canada. In the second season, Reitman will bring the same brutal honesty that made Season 1 resonate so strongly among fans.

Now, if those mom fans can actually find time to sit down and watch all 13 episodes is another story entirely. Luckily, the show is on Netflix so you can make your own watch schedule — even if it may eventually get interrupted by a tiny person who needs their butt wiped for them.

More Like This
Take An Exclusive Sneak Peek At 'Bluey' Season 3 Before It Lands On Disney+
The White Lotus Is The Perfect Thrilling Treat For After The Kids Go To Bed
The Worst Fake Babies In The History Of Movies & TV
10 Cozy, Romantic, & Drama-Filled Shows To Watch If You Love 'Virgin River'