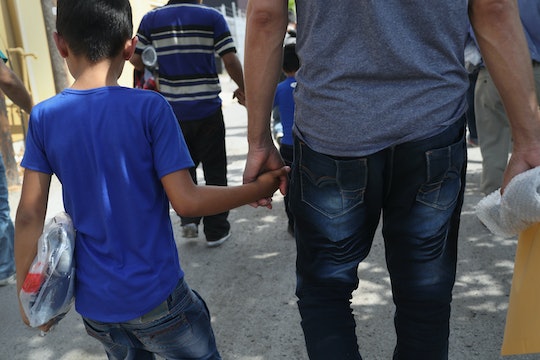 How Many Immigrant Families Have Been Reunited? Here's What's Known Right Now

Last week, a federal district judge ordered the Trump administration to reunite every immigrant family that was separated due to the "zero tolerance" policy. Given that there were a reported 2,000 kids in the Department of Health and Human Services' custody since the rollout of the policy, how many immigrant families have been reunited so far? According to a new CNN report, the government agencies haven't been keeping the public updated on their progress, despite having quite a few deadlines from last week's ruling. The White House, the Department of Homeland Security, and HHS did not immediately return Romper's request for comment.

UPDATE: A spokesperson for the HHS’ Administration for Children and Families told Romper in an emailed statement:

HHS’ Administration for Children and Families is focused on continuing to provide quality services and care to the minors in our Office of Refugee Resettlement-funded facilities and reunifying children and teenagers with a relative or appropriate sponsor as we have done since inheriting the program. Reunification is always the ultimate goal of those entrusted with the care of unaccompanied alien children, and we are working toward that for those unaccompanied alien children currently in our custody.

EARLIER: As reported by Politico, U.S. District Court Judge Dana Sabraw, based in San Diego, issued a preliminary injunction last Tuesday ordering that children under 5 years old be reunited with their parents within two weeks, and that older kids be returned to their families within 30 days. He also ordered that all parents be given contact information to call their children by July 6. According to the Los Angeles Times, Judge Sabraw wrote in his ruling, "The government readily keeps track of personal property of detainees in criminal and immigration proceedings... Yet, the government has no system in place to keep track of, provide effective communication with, and promptly produce alien children."

"The unfortunate reality is that under the present system migrant children are not accounted for with the same efficiency and accuracy as property," the judge continued in the same ruling, as reported by the San Diego Tribune. "Certainly, that cannot satisfy the requirements of due process."

Yet, as CNN reported on Tuesday, there hasn't been any update on the number of families that have been reunited so far, despite the enormity of the endeavor. As of June 20, ABC News reported that of the estimated 2,300 kids separated from their families since May, only 500 had been reunited with their families, though it wasn't clear how many of them were still being detained by Immigrations and Customs Enforcement or HHS. So there's still a lot of reuniting to be done.

When asked about its plan to keep up with the deadlines laid out by the judge, HHS reportedly told CNN's Catherine E. Shoichet:

As HHS continues to evaluate the impact of the District Court ruling, and given the constantly changing number of unaccompanied alien children in our care (every day minors are referred to our care and released from our care to parents, close relatives or suitable sponsors), we are providing the total number of unaccompanied alien children in the care of HHS-funded grantees. While we understand the interest in detailed breakdowns of this information, our mission has been and remains to provide every minor transferred to HHS, regardless of the circumstances, with quality and age-appropriate care and a speedy and safe release to a sponsor.

The Department of Justice, which issued the "zero tolerance" policy that led to the surge of separated children, did say that it would comply with the judge's ruling, and they are scheduled to appear in court on Friday for a status check, according to another CNN report.

It's possible that they will release new numbers and a plan to meet the judge's deadline after that hearing. In late June, the Trump administration issued a plan to reunite families that included facilitating more communication among agencies and in between parents and kids, as long as a promise to detain families together.

With one catch, though — families could be detained together if the adults agreed to have their children deported with them, according to The Washington Post, which could mean putting their kids in danger for some families, depending on the circumstances that drove them to seek asylum or flee their home countries in the first place. Advocates for immigrant families, including the American Civil Liberties Union, complained that the plan is not effective or goes far enough.

According to a The New York Times report this week, families are also reportedly being asked to spend thousands of dollars to be reunited or have their children sent to live safely with an American relative or foster agency if they are slated for removal. "The government is creating impossible barriers and penalizing poverty,” Neha Desai, director of immigration at the National Center for Youth Law in Oakland, California, told The Times.

It's pretty clear that there are a lot of different aspects about reuniting families at the moment, so it makes some sense that the agencies involved want to make sure they have their numbers in order before releasing them to the public. But they should all make sure that informing the public about family reunification progress is a priority, because this issue is not likely to be forgotten anytime soon.