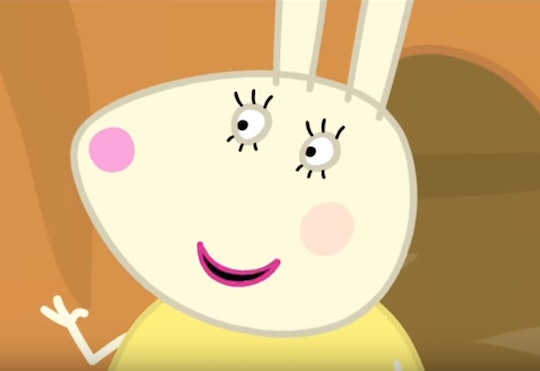 Did You Ever Realize That Miss Rabbit Does ALL The Jobs On 'Peppa Pig'?

Try to think of the hardest working person you know. Now let me tell you that I can think of someone who is working harder than your person, hands down, except she's not a human and also not real, so maybe your person still sort of wins. I am, of course, thinking of Miss Rabbit from Peppa Pig. Now if you've been casually watching Peppa Pig and wondering how many jobs Miss Rabbit has, this career girl is essentially running the entire show. Now let's make sure she gets the credit she so richly deserves and perhaps a pay hike because she doesn't seem like the kind of gal who would ask for a raise on her own.

I'm not sure what the other adults in the life of Peppa Pig are doing with their time, but they seem to be leaving all of the jobs for Miss Rabbit, the aunt of Rebecca Rabbit and sister to Mummy Rabbit. I mean, sure, Daddy Pig does appear to head off to work when he's not eating all the cookies and then getting gently body shamed for his "round tummy" by his daughter Peppa and son George Pig, but for the most part the other adults on the series only work at implied jobs rather than real ones.

Not so with our hardworking heroine, Miss Rabbit.

At various times during Miss Rabbit's run as a regular character on Peppa Pig, Den of Geeks reports she has worked as:

That's right folks, 14 jobs minimum. Now please try to imagine the many years of education and certification a lady rabbit would need to become any or all of these things. No wonder she has so many jobs, her student debt must be ludicrous!

To add insult to injury, the writers of Peppa Pig had the audacity to make her ever-revolving careers into a bit of a joke in an episode called Miss Rabbit's Day Off, where her sister Mummy Pig tries to do all of her sister's job and, unsurprisingly, has a tough time of it.

Before you go feeling too sorry for Miss Rabbit, please know that she received an award from the Queen of England herself for being such a hard worker in 2015, according to the Daily Mail, in celebration of Queen Elizabeth's Diamond Jubilee. She's the only Peppa Pig character to get such a royal ego boost, so that's something.

I'm still unclear about how fans are meant to be viewing Miss Rabbit. As a staunchly independent feminist who follows her dreams with great success, regardless of how exhausted she might be? Or as an over-ambitious woman who can't keep track of all her jobs? I'm asking my niece the next time we watch, she'll know for sure.

Finally, I'm simply hopeful that Miss Rabbit gets a few more days off in upcoming seasons when she's not sick. I'd like to see her fly herself to Bali in her own helicopter and lay on the beach for a week. Wait, this episode might be for adults-only...