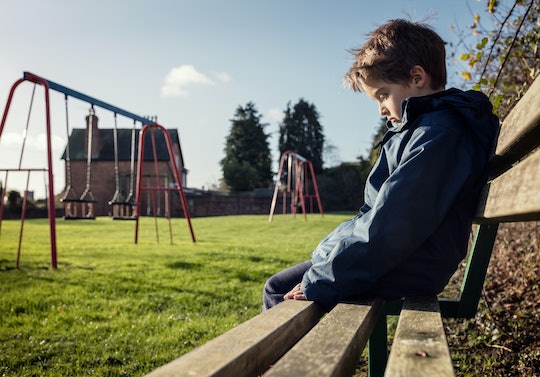 Wow, Turns Out There's An Alarmingly High Number Of Kids In Foster Care

Unless you have some personal experience with foster care, you're probably not particularly aware of how the system works... or doesn't work. I've been guilty of this myself: All I really knew was that a foster home was a temporary version of an adoptive home (not strictly true, as it turns out). Of course I'd heard horror stories about terrible foster parents and kids slipping through the cracks, but I'd also heard success stories of selflessness and strength. But what about all the families in the middle? And how many kids are in foster care, anyway?

What's more important than the actual number, perhaps, is the fact that there are more foster kids than there are willing foster parents (or resources) to care for them. The shortage of foster parents in recent years has become a crisis in many states; in Texas, some children have even been forced to sleep in child welfare offices, as The Huffington Post reported. The combination of an increase of kids entering the system and the high turnover rate of foster parents (30 percent to 50 percent) means that not only is there a lack of homes, but children end up getting bounced from one family to another to another.

The numbers are staggering: Over 437,000 children and youth are in foster care, according to the American Society for the Positive Care of Children, and 45 percent of foster children live in non-relative foster family homes. As for the rest, 32 percent live in relative foster family homes, 23 percent live in institutions, group homes, trial and pre-adoptive homes, and 118,000 children and youth are waiting to be adopted. Why so many? A 2017 report from the Administration for Children and Families of the Department of Health and Human Service which demonstrated an increase in the number of foster children for four years in a row pointed to rising rates of parental substance abuse as a major cause. Tragically, however, neglect is the number one reason why children are removed from their biological families, according to the ASPCC.

The shortage of homes for these children, meanwhile, can be attributed to a variety of factors. Potential foster parents face an incredible amount of hurdles, including financial challenges. As foster mom Emily Westbrooks wrote for a previous Romper article, foster care does not pay well:

"Families in Texas will be paid by the state about $675 per month, per child. And that payment is to cover food, daycare, clothes, diapers and wipes, and school supplies. Many foster children arrive only with the clothes on their backs, so it's not as though you can make it work with what they have."

Others who consider foster parenting as a means to the eventual end of adoption might be disappointed to learn that the goal of foster care is almost always reunification with a biological parent or family member, Westbrooks wrote. Not everyone can handle the heartbreak of getting attached to a child only to say goodbye, especially when they're not certain how well cared for that child will be with his or her biological family.

Still, other prospective foster parents might worry that they're not equipped to handle the likelihood that their foster child or children could have problems beyond their scope. A study published in the journal Pediatrics found that foster kids are six times as likely as other children to have behavioral issues. Nathan Fox, director of the Child Development Laboratory at the University of Maryland, told The Washington Post that these problems can “range all over the place, depending on the kid and what happened to them previously.” While some kids can be physically aggressive or disruptively uncooperative, others might have trouble with anxiety, depression, or impulse control.

“Kids who experience abuse or neglect have behavioral problems which are ultimately associated with the development of psychiatric problems,” Fox said.

The fact is, foster care will be a necessity forever. Even if no parent ever neglected their child again or used drugs again, children would still be orphaned. So while, as a society, it's important that we find ways to support parents and decrease the number of kids entering the system, it's just as important that we work to improve foster care... because children will always need it.