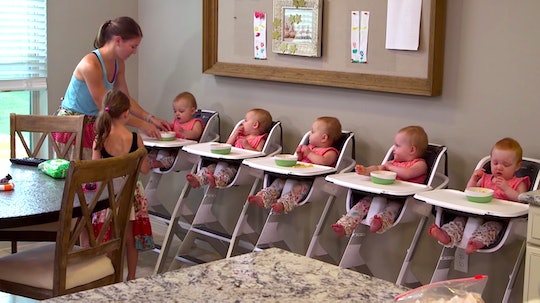 Adam and Danielle Busby are known for something pretty unique: the fact that they are parents to a set of all-girl quintuplets. The Busbys star in the TLC reality show OutDaughtered, where fans can learn all about their hectic life raising their brood. But, those who have yet to tune in to the show might be wondering, how many kids do Adam and Danielle Busby have?

Danielle gave birth to the first all-female set of quintuplets in the United States in April 2015, KTLA5 reported. The Busby quints were also the first all-female set of quintuplets born in the entire world since 1969. Danielle and Adam named the girls Ava Lane, Hazel Grace, Olivia Marie, Parker Kate and Riley Paige, and they quickly captured media attention due to the family's blog about the experience, “It’s a Buzz World."

And while five 3-year-olds sounds like plenty of work for one set of parents, the quints are not Adam and Danielle's only kids. In April 2011, four years before they welcomed the gals, Danielle gave birth to their first child, Blayke Louise, who is currently 7 years old, according to Country Living, meaning they have six kids total. Having an older daughter running around while Adam and Danielle attempted to change five diapers at once certainly didn't make parenting the quints any easier, but it definitely made things more interesting.

According to Adam and Danielle, all of their daughters have very distinct personalities. In a video taken at a joint birthday party for the six girls, the parents revealed their most concise descriptions of each kid's personality. Blayke is the teacher/mommy of the group, Ava is the smiley one, Olivia is the goofy one, Hazel is the sweet one, Riley is the troublemaker, and Parker is the shy one.

All that being said, it's no surprise that the Busbys quickly became the subject of a reality show about their lives. And despite the inevitable chaos that comes with raising six children, Adam and Danielle seem to have worked out a pretty solid system. In an interview with Fit Pregnancy, Adam said:

We were lucky enough to learn how to be parents with Blayke—it was a bit of a trial run for us. We try to apply those skills to our new life and we're adamant about keeping a schedule for the quints. That's what helps keep it together.

Danielle agreed, adding that working out a routine for the quints was key. As she told Fit Pregnancy:

I can't imagine having five babies that didn't eat and nap at the same time! We know their routine, so we can still have quality time as husband and wife—and still spend special time with Blayke.

Still, it seems like a miracle that Adam and Danielle have the time to care for their family and make enough money to support them. In addition to starring on OutDaughtered, Danielle works as an independent beauty consultant, and Adam works as an account manager, according to their official TLC bios.

Furthermore, the couple has plans to open an indoor cycling studio along with two other couples. In an interview with StyleBlueprint, Danielle said:

We are going to be opening an indoor cycling studio, though, which is going to be me getting back into the groove of things, so I’m excited about that ... I’m excited to be getting involved in the fitness industry because it’s a passion of ours. We’re going into it with two other couples, who are great business people but also great friends of ours.

It sounds like between six kids and their careers, Adam and Danielle Busby have plenty going on to keep them occupied!