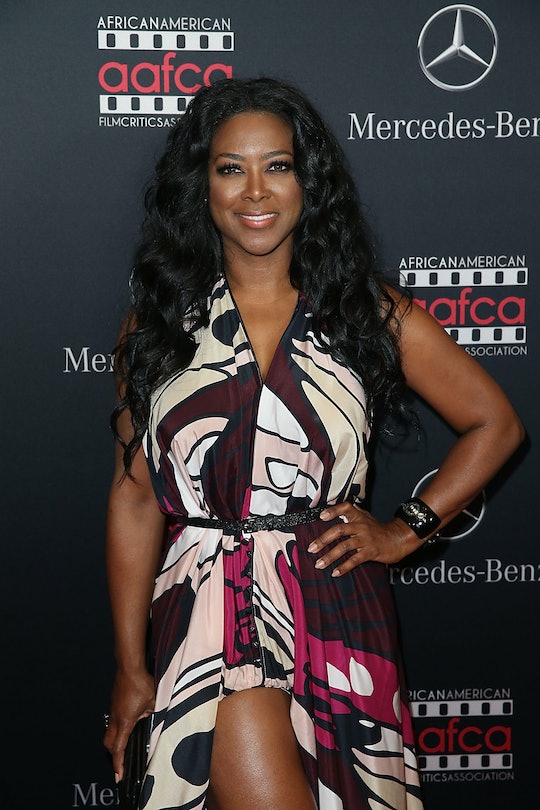 Kenya Moore & Her Husband Are Hoping To Become Parents

The question of whether Kenya Moore's marriage is "real" continues to be a major plot point in Season 10 of Real Housewives of Atlanta. The drama soared to new heights on a recent trip to San Francisco, where Marlo Hampton roped the group into poking fun at Kenya in her absence after she left the trip early. But recent reports placing Kenya and her husband Marc in Barbados for fertility treatments appear to refute rumors challenging the veracity of her relationship. So how many kids do Kenya Moore and her husband want? While neither of them have a specific number in mind, Kenya announced at her wedding last June that they planned to start a family quickly. "We both want to start a family and soon — like, right away," Kenya told People in the exclusive profile of her wedding. "We both want a child."

In November, she was spotted by TMZ entering the Barbados Fertility Centre (although I'd be willing to wager that it was Kenya herself who tipped them off to her whereabouts). Marc wasn't with her, but according to the report, he planned to join her a few days later. They were reportedly scheduled to be in the Caribbean for about two weeks while she underwent IVF. We've seen Kenya pursue fertility treatments on the show once before, during Season 6. But because she was single, her family didn't support the idea and she evidently backed out of her decision to try getting pregnant at the time.

It's nice to see that Kenya and Marc appear to be on the same page about having kids, especially given her long road to steady partnership. She's always been plagued by rumors of having fake boyfriends on the show who are played by paid actors, but this year's heat seems especially cruel. Cynthia Bailey even walked out of the collective "Trash Talk Kenya's Marriage" session orchestrated by Marlo on the San Francisco trip because it bummed her out so much. "These girls are a trip," Cynthia later said in a cutaway interview. "They rained on Kenya’s parade when she didn’t have a man, they rain on it extra hard now that she does have one."

But, Cynthia also admits that one of the reasons she walked away from the conversation is because it was upsetting for her to hear the girls talk about Kenya's wedding, which she wasn't invited to. Cynthia and Kenya seem to have a genuine friendship this season, and Cynthia's been one of her biggest supporters during an otherwise unpopular phase. Kenya didn't invite any of the Housewives to her St. Lucia beach wedding — not even her dad was invited. But nonetheless, Cynthia clearly felt betrayed and left out, if sympathetic to the snub.

The reports indicate that Kenya only began her fertility treatments last month, but she's been teasing a potential pregnancy storyline for Season 10 since before it even premiered, telling fans in a video for BravoTV.com that they may have a "little twirl" to look forward to in the near future. According to TMZ, Bravo cameras weren't in tow on Kenya's trip to Barbados, but that's reportedly because she's saving the news (if she does in fact successfully get pregnant) for a reunion show reveal.

Marc has yet to appear on camera, and it seems like we won't be introduced to him at all this season, not even on the reunion show. The couple is keeping their relationship super private, which definitely fuels speculation, but it also seems to feel healthier to them.