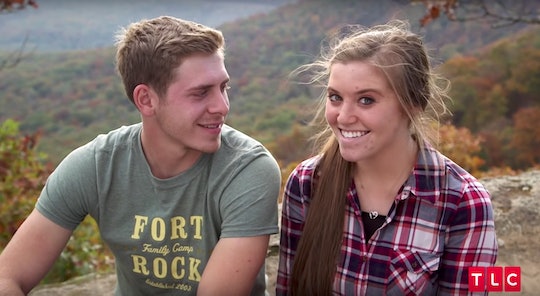 Fans of TLC's hit series 19 Kids and Counting got to watch Joy-Anna Duggar grow up amid her many, many brothers and sisters in a conservative household as the reality TV cameras rolled. Now, the show's over and Joy-Anna is all grown up, married and expecting her first child of her own. The genesis of this brand-new offshoot of the Duggar family that she's starting with new husband Austin Forsyth has fans all in a tizzy as they witness the family grow and grow and grow as the older kids get married and have babies of their own. But, at just 19 years old, how many kids does Joy-Anna Duggar actually want? If you know anything about her family's ultra-Christian beliefs, the answer won't surprise you. Like, at all.

Joy-Anna and Austin got married in May before 1,000 guests at their Arkansas Baptist church after a courtship sanctioned and closely monitored by her family. Not long afterwards, they shared their future family plans with People. "We love kids and we're excited to have a family," the couple told the magazine. "We're just going to see what the Lord does." So, it certainly sounds as though Joy-Anna and Austin are planning to do as her parents did and, well, potentially have 19 kids, if that's how it happens to shake out. But if there was any doubt left about that, Joy-Anna clarified:

We want as many as the Lord thinks we can handle and we are putting it into his hands.

And just a few months later, God was apparently as ready for them to get their family started. The newlyweds announced at the end of August that they were expecting their first child, and that they could not be happier. On their shared Twitter account, Joy-Anna wrote, in part:

Austin and I are SO thankful to announce that we are parents!! Even before we were married we prayed that God would give us children and we are so blessed that he has given us this baby! Jesus is the giver of Life!

Clearly, having children (as many as nature allows) is important to Joy-Anna, and it seems as though all is going to plan in that respect. And that's to be expected, as not having as many kids as possible is literally against the Duggars' religion. In addition to the intense courtship rules that dictate that couples can't hold hands before they're engaged and must save their first kiss for marriage, using any form of birth control is out of the question. It goes without saying that having an abortion would be beyond unheard-of in the Duggar world, and Joy-Anna herself has touted her pro-life beliefs on social media.

Now that we know that Duggar and Forsyth plan to take a hands-off approach to family planning, it seems as though fans can expect the babies to just keep coming. And that's good news for Duggar-lovers and Duggar herself, as she has spoken glowingly about her own upbringing and her desire to recreate it for her own kids, as she told People magazine:

I have a lot of good memories of my mom teaching us and the quality time we spent together, and I'm really looking forward to doing that with my own children. It's such an amazing thing to be a parent and raise children!

So, congratulations to Joy-Anna and Austin! Big families run in the gene pool, and they seem thrilled about starting one of their own. Assuming that the Lord is, in fact, on board with it, they may soon star in their own version of 19 Kids and Counting.