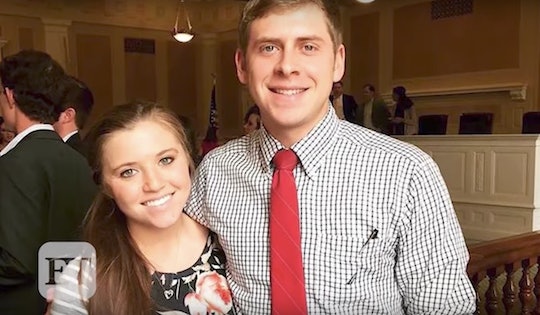 Most of the world seems to be rife with political undertones these days. And it's no surprise that more and more celebrities are speaking out about politics and policies — and athletes are also taking a stand, or rather, a knee. Not a day goes by without something happening on the world's political stage. And while it's certainly providing plenty of interesting and necessary talking points, there will be disagreements. So, when certain reality television stars make a life update suddenly about politics, people have feelings about it. Yesterday, for example, people were really pissed about Joy-Anna Duggar's latest pregnancy update because it was coupled with a message about her stance on abortion.

On Monday, Duggar — who married Austin Forsyth in May and announced her pregnancy in August — posted a new set of Instagram photos, with the first one showing off her bump, as In Touch Weekly reported. But it was the two other photos that followed that have people talking. The reason? They both carry strong anti-choice images. Romper has reached out to representatives for TLC for comment regarding the post and is awaiting a response.

The only hints that there was a political message before swiping through the pictures were found in The Counting On star's caption, which contained the hashtags, "#childrenareagiftfromGod and #westandforlife." But the additional photos alone were enough to get people talking.

The second image in Duggar's post featured little baby feet with the words, "Life offers no guarantees, but abortion offers no chances." The photo also contained the slogan, "so every child makes their mark," at the bottom, which is the motto for the Human Coalition, a pro-life advocacy group.

In the third photo, Duggar posted a shot of her husband, Austin, holding a sign on the side of the road that reads, simply, "abortion kills children."

"However what may be right for you it isn't right for other women and their personal circumstances," one person wrote, explaining, "I am pro-choice."

Some users were just confused as to why Duggar even felt the need to post anti-choice images at all. "Why share anti abortion photos along side of your baby bump pic?" one user wrote. "Stop using your baby as a political argument."

In turn, some commenters veered on the side of Duggar's underlying views, with one writing:

Abortion is a disgusting vile thing... you kill a baby just because it's convenient for you because you were being stupid and having sex knowing if you end up pregnant you have abortions as a fall back... that's selfish and disgusting!

And things got even more heated when others pointed out that if the young couple truly felt convicted about abortion, then they should do more than just post about it. "Consider causes and political activism that promote comprehensive sex education, free access to birth control, and supplementing income for families to care for their children," another follower wrote.

Duggar's politically-charged post certainly ignited outrage from both sides of the debate. However, it is interesting that Duggar would choose to make such a strong statement while also celebrating the progress of her own pregnancy, considering the current state of this topic. In the end, each person is entitled to their own opinions about abortion and, as it turns out, a lot of people were pissed with how Duggar expressed hers.