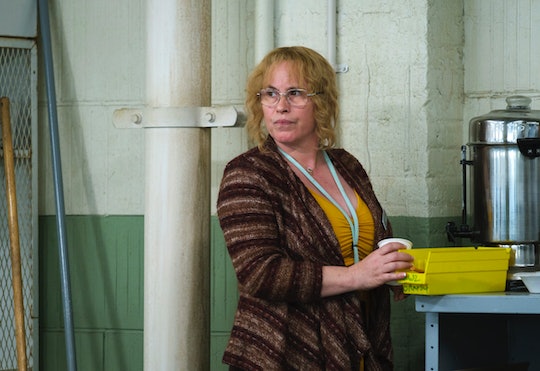 'Escape At Dannemora' Touches On Joyce Mitchell's Life As A Mom

The limited Showtime series, Escape at Dannemora, is so incredibly interesting — and what's even more interesting is that it is based on the true story of an Upstate New York prison break in 2015. At the helm of this prison break was Joyce "Tillie" Mitchell, a prison seamstress who was convicted in helping two prisoners escape. After watching the show, people are probably dying to know more about Mitchell's personal life. So, it's OK if people are wondering — how many kids does Joyce Mitchell have? Because Escape at Dannemora only touches on her life at home.

The show hones in on two inmates serving life sentences for murder, Richard Matt and David Sweat, who escaped the Clinton Correctional Facility in upstate New York in 2015. But they didn't do it alone — they had help from Mitchell, who was working in the prison, according to E! News. Mitchell had a "sexual relationship" with at least one of the men, according to E! News, and helped both of them break out of prison. Her involvement with the two men and their escape led to her pleading guilty, according to CNN, and was sentenced to a minimum of 2 1/3 years in prison for her role in the escape, according to ABC News.

But she also had a life at home, separate from the two inmates and the life she led when she had her job. The 51-year-old was married to her husband, Lyle Mitchell, for 14 years at the time of the escape, and had one son — Tobey Mitchell, according to CNN.

Before marrying Lyle, Joyce was married to her first husband, Tobey Premo, according to People. In the early 1990's, they welcomed their son, also named Tobey, into the world. Tobey was adopted by Lyle after the couple got married, according to CNN, and the couple raised him together. Tobey is Joyce's only biological child.

Tobey had defended his mom after the allegations were made about her involvement in the prison break. In 2015, Tobey told NBC News that his mom wasn't the type to help inmates escape. "She is not the kind of person that's going to risk her life or other people's lives to let these guys escape from prison," Tobey said.

Tobey's wife, Paige Mitchell, told NBC News at the time that their family was going to stand by and defend Joyce and that they "love and support her no matter what. Not even that situation will bring us down."

Joyce even had Matt paint a portrait of her family as an anniversary gift for her husband, according to E! News, which shows just how much she cared for her family — even if she would eventually help Matt escape from prison.

During her first televised interview with NBC News, Joyce claimed that her involvement in the escape was because she had her family in mind. "I deserve to be punished," Joyce said in 2015. "But you know, people need to know that I was only trying to save my family."

Lyle also had two daughters from a previous marriage, according to People, but it's unclear if they were close to Joyce. Even if Tobey tends to keep a low profile nowadays, it's helpful to now how he felt about his mom's involvement with the escape.

Although Escape at Dannemora only touches on Joyce's personal life, it's interesting to know more about the woman who aided in one of the most complicated prison escapes of all time. And her son was a huge part of her personal life.