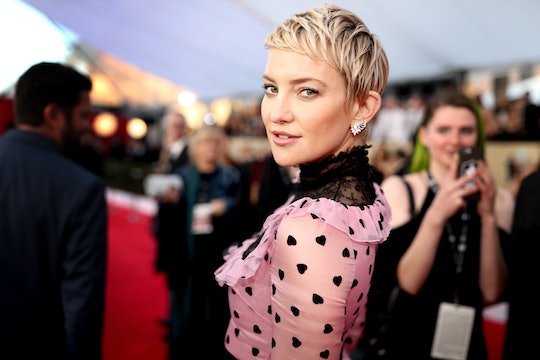 Kate Hudson Has Baby No. 3 On The Way, But How Many Kids Does She Want?

In case you missed it, one of Hollywood's elite, Kate Hudson, recently announced that she's pregnant with her third child — a baby girl! With two boys at home and a daughter on the way, some fans may be wondering just how many kids Kate Hudson wants given the exciting baby news. Well, it actually seems like the birth of her third child might just give the actress the perfect-sized family she's always wanted.

In an Instagram video shared on April 6, Hudson informed her fans that she had been MIA on social media recently because she was suffering from intense morning sickness. "It was the most sick first trimester of all my children," she captioned the sex reveal/ pregnancy announcement video. "We have been trying to keep this pregnancy under the radar for as long as possible but I’m a poppin now! And it’s too darn challenging to hide, and frankly hiding is more exhausting then just coming out with it! My kids, Danny, myself and the entire family are crazy excited! A little girl on the way."

It seems that this news couldn't be more perfect for the mom-to-be and her family. Yes, in a March interview with UK publication, The Times, Hudson was actually asked whether or not she wanted more kids. So, what was her response?

Yes, you read that correctly. A mere 11 days before Hudson announced that she was having a girl with boyfriend Danny Fujikawa, she told an interviewer that she would like to have a daughter.

While it's a little unclear just how many kids Hudson wants, it seems like she might actually be about to get exactly what she wished for. Of course, though, she also stipulated that it depends on what Fujikawa would like. "We’ll see how many Danny wants," she told The Times in the same interview.

And semantics aside, it definitely seems as though the two are perfect for each other. Appearing on The Talk, Hudson previously explained that she and Fujikawa have actually known each other for quite a while, and starting a relationship together was almost natural. "We've known each other for 15 years; he’s my best friend’s stepbrother," she said, according to People. "We kinda skipped through the part of knowing what the hiccups were. You kinda skip the part of going, 'Oh, you're like that?'"

When their relationship was first made public, a source reportedly told People that they really were made for each other. "Kate's a free spirit who has always been attracted to musicians. But Danny also appeals to her because he is talented, bright and cosmopolitan like she is." The two clearly belong together, and now that they're welcoming a baby girl into the world, there's really no telling what will happen next for the happy couple.

No matter how many kids the 39-year-old actress wants, or ends up having, she explained that this pregnancy has been pretty difficult. As she said in her Instagram post announcing her happy news:

Boomerangs have made me nauseous, Superzoom is an easy way to have my head in the toilet, food instagrams make me queezy and thinking too much about insta stories made me even more exhausted than I already had been.

Hopefully, Hudson is feeling better in her second trimester as she prepares to welcome her baby girl. Although it's unclear if three kids is the perfect number for her, this little girl, without a doubt, will have an amazing mom.