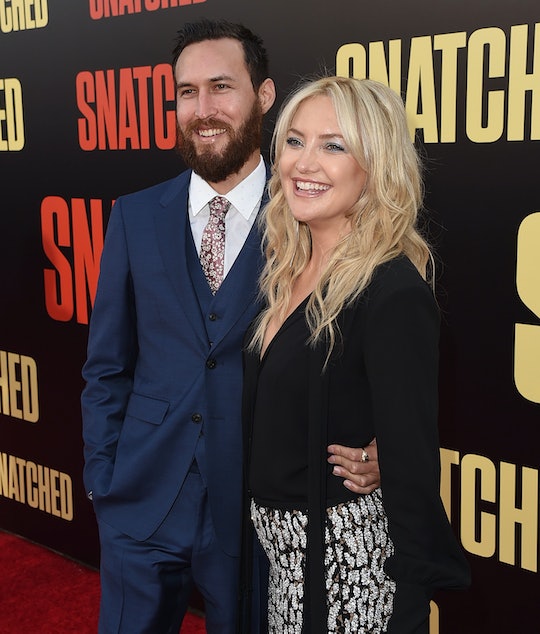 Things are going pretty well for Kate Hudson these days. Last week, the actress and mom-of-two announced that she's pregnant with her third child. It will be the first child together for Hudson and her boyfriend Danny Fujikawa. That being said, you might be wondering how Kate Hudson and Danny Fujikawa met. The couple has only been together for a little more than a year, but they actually have a years-long history as friends. Not to mention, they both seem so happy to be starting a family together.

Hudson actually shared the story of how she and Fujikawa's relationship came to be in an Instagram post on Dec. 3. The post features a photo of the couple sharing a smooch on a bridge along a hiking trail, accompanied by a dog. In the caption, she told the story of their first date, which occurred exactly one year prior, as well as the story of their 15-year-long friendship.

Alongside the romantic picture, Hudson explained how she first met Fujikawa, who was previously the lead singer and guitarist for the band Chief and currently owns record label Lightwave Records. "The first time I met Danny I was 23 and enormously pregnant with Ryder," she wrote. "His step sisters are my best friends @sarafoster @erinfoster and so it goes we have been in the same circle for over a decade!"

Hudson's caption then jumps quite a few years into the future, to the day Fujikawa and her went on their sort-of first date.

A year ago today Danny took me on a hike and what I thought was just a hike with a family friend turned very quickly into an unexpected first date. No moves were made on this first date. In fact, it took months for him to make a first move! And as a kiss on this bridge would have been nice, the kiss a year later was so much sweeter. So on our 15th year of knowing each other we were able to open our hearts to each other to feel so much pure love and it’s been truly incredible.! ❤️Happy first date anniversary baby. #LoveThisMan 🙏 #WhatAYear

Basically, it took Hudson and Fujikawa over a decade to realize that they are perfect together — and that totally makes their love story even sweeter. And based on statements Hudson has made about her partner in the past, it seems like their strong friendship has laid a solid foundation for their relationship.

In an interview with Extra in May 2017 and as reported by Us Weekly, Hudson raved about Fujikawa. “My cute man. He’s the best!” she reportedly told Extra. When a reporter asked Hudson what she loves most about him, she said, “How long do you have? He’s a good man.”

Hudson and Fujikawa announced they were expecting a baby on Friday by sharing footage of their sex reveal party footage with a super sweet caption on Instagram. In the post, Hudson also disclosed that she's expecting a girl, which, by the looks of the footage, she's pretty dang excited about. (Her other two children are both boys, so you can't really blame her for shrieking with joy upon finding out that she's having a girl.)

"My kids, Danny, myself and the entire family are crazy excited! A little girl on the way 💕," Hudson wrote at the end of her post. They both seem so jazzed about their upcoming bundle of joy, and it's easy to see why.