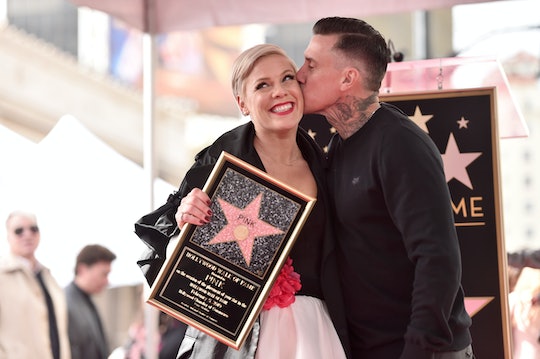 When Pink Wanted Another Baby, Her Hubby Had A Very Interesting, On-Brand Response

Ah, marriage. It all comes down to compromise. It's the classic trade-off if you want to stay with the person you love for the foreseeable future and not even one-named rock stars get a free pass from it. Take the singer Pink, for instance. She is married to professional dirt bike racer Carey Hart, and the couple seem pretty happy together. But that doesn't mean she gets her way on every little issue in their lives, and that includes kids. If you're wondering how many kids Pink has, please know she might want more but her husband had an interesting, alternate suggestion.

The "Beautiful Trauma" singer and her husband have been married since 2006 and have two kids together, 7-year-old daughter Willow Sage and 2-year-old son Jameson Moon. In other words, they have what some people call the "million dollar family" that is much coveted the world over: one daughter and one son. The perfect little nuclear family.

But guess what guys? Perhaps unsurprisingly, rock star Pink might not be all that interested in chasing the dream of a conventional family. She might even be willing to roll those dice and go for something more... or at least one more, at any rate.

On Tuesday, the singer took to Instagram to admit something sort of huge — maybe she wanted another baby. Which would mean we would have more of her super talented DNA floating around the world. But unfortunately, her husband wasn't quite as delighted, as she wrote on Instagram: "My ❤️ won’t give me another baby, so he built me one. She rips."

And then she shared a picture with her new "baby."

Now if I was thinking I wanted another baby and someone gave me a motorcycle, I might be less than impressed (probably because I don't know how to ride one). But I am obviously not as bad*ss as Pink.

Carey Hart shared a photo of the singer riding her new bike on his Instagram feed with the caption, "Mama @pink finally got to take her new ride for a rip! This is how we do date night."

So I guess they're on the same page, I suppose.

To be fair, the family does seem to really love their dirt bikes so this could be considered something of a baby. Even little 2-year-old Jameson got in on the action back in February, according to Hart's Instagram, riding a tiny electric bike across his dad's garage with zero concern.

Hart captioned the Instagram video, "Jamo blows me away!!!! Today at the shop I broke out his @ridestacyc electric bike. Literally his first go he made it the length of my shop! I was a little nervous about the throttle, but he picked it up instantly. Not bad for 2 years old. Gonna have my hands full lol."

As for daughter Willow... well, she's all about that sweet BMX time with her dad.

So sure, at the end of the day we would all love to see another little Pink offspring wandering around. But it seems as though this family is pretty happy adopting some wheels instead, so we'll just have to put our dreams on hold.