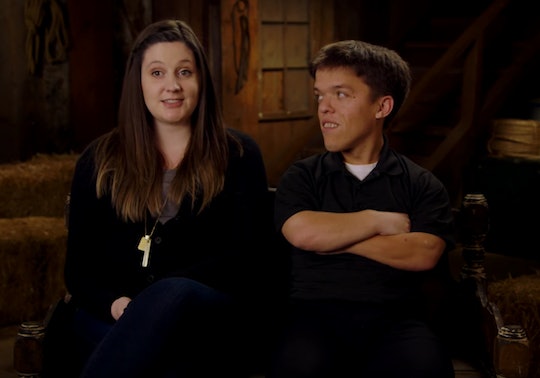 This is a super exciting time for fans of TLC's Little People, Big World. Not only is the show currently off air on TLC, but the show's stars, Zach and Tori Roloff are currently expecting their second child together. So this begs the question — how many kids does Tori Roloff want?

More Like This
Queen Elizabeth Has Given Her Royal Approval For A New Line Of Beer
Exclusive: Teen Artist Tyler Gordon Reveals The “Ultimate Hero” He Wants To Paint
Ben Affleck Shared A Cute Halloween Photo With Jennifer Garner & Their Kids On Instagram
Halle Berry Shared A Beautiful Throwback Pregnancy Photo On Mother’s Day

It's hard to believe that baby number two is well on the way for their little family. The TLC stars, known for being a small part of the bigger Roloff family (and their incredible family farm) have practically grown in front of TV cameras. Fans watched them get married on TV in 2015, and watched Tori give birth to their son, Jackson, in 2017. And now fans get to watch them grow in another huge and major way — they're expecting their second child, a little girl, due some time in November, according to Us Weekly (that's five months from now, in case anyone is keeping count).

Having two kids in two years is so exciting for them, but this second pregnancy might have come as a surprise to some people. So of course, people are wondering if they'll expect even more kids from them in the future.

The answer is yes, they do want more kids, and they want a lot more. "I would love four or five kids," Zach told Us Weekly in May. "I want a little pack. Right now, we're kind of [like], if it happens, it happens."

While Zach wants four or five kids (which means two or three more pregnancies in the future), it's a little unclear if they see eye to eye on an ideal number. Last year, Tori did tell fans in a question and answer session on Instagram that she wants either "three or four" kids, according to InTouch Weekly. But, it's possible that her number has changed to match her husbands in the past year. Tori did however, agree with Zach on the fact that they both want a big family. "It's just on God's timing and just whenever," Tori told Us Weekly in the same interview.

So, it's safe to say that they want quite a large family — even if they're waiting to see how many children are in store for them. But whatever that number may be, they're more than happy to accept it. "We have plans," Zach added. "We want a family."

This makes sense since Zach comes from a pretty big family himself — he is one of four kids that are pretty close in age.

Whether the couple ends up having just three or five kids, one thing is clear — they're on the same page about wanting a big family, and they're well on their way to having one.