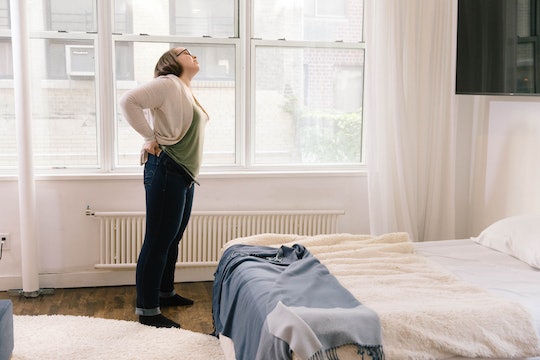 Before Your Shopping Spree, Here's What To Consider When Buying Maternity Jeans

When I first became pregnant, I was blessed with bloating from hell — I felt like I already looked like I was four months pregnant some days, and I was only 10 weeks. I immediately went and bought maternity leggings because my pants were cutting into me and I felt like I was in a sausage casing. Weirdly enough, in my second trimester, I could fit into my regular jeans and shorts again, but as I neared the third trimester, they became more and more uncomfortable. Now that I’m here, how many maternity jeans do you really need to own?

Unfortunately, there's no easy answer. I guess it really depends on how uncomfortable you are in your regular pants — and for some women, that’s in the first trimester — and how often you want to do laundry. How many pairs of pants do you go through a week? That’s probably the same for maternity pants, especially since most well-made maternity jeans have a band that grows and stretches with your pregnancy. It also depends on the quality. If you just get two pairs, they’ll probably get a ton of wear. Will they hold up for a long period of time with so many washes?

According to several pregnancy message boards, it varies how many maternity outfits women purchase. It depended on their job, when they start to feel uncomfortable in regular clothes, their own personal style, and how often they feel like doing laundry. The general consensus in all of these groups is that every single woman and pregnancy are different. Some women start wearing maternity gear at eight to 10 weeks because of bloat and general uncomfortableness in their regular clothes. Some women don't start to “show” until much later, or are able to get away with wearing leggings and dresses they already owned. I fell into this category because I work from home, so I can wear leggings whenever the hell I want. It’s a pretty sweet perk. And when I went out, I would wear dresses I already owned. I felt cute, stylish, and not self-conscious about my body in them because I was proud of my baby bump.

I have personally found Motherhood Maternity has some pretty quality pieces. I’ve purchased maternity lounge pants, maternity bras, a couple of shirts, and underwear from there — and in comparison to my items from other popular stuff, they’ve lasted a lot longer. Stores like Amazon, Target, JcPenney, Old Navy, and Gap have maternity sections, though depending on where you live they can be pretty small. Otherwise, there are dedicated maternity stores like Motherhood Maternity, Destination Maternity, A Pea in the Pod, Motherhood, and Seraphine.com and DueMaternity.com for “designer maternity wear."

If you’re really not wanting to spend the money on maternity clothes, depending on your style, there are some ways to use what you have in your closet. I’ve just been wearing a ton of my A-line dresses that I wore pre-pregnancy. When it’s been cold, I throw some fun leggings or pantyhose underneath. And when it’s been warm, bare legs it is. Comfortable, and affordable, since I’m just wearing what I already own.

For what it’s worth, maternity clothes are made to accentuate your bump, making you look awesomely pregnant instead of “frumpy,” as some women mentioned on maternity boards. When you wear all baggy clothes, you may not feel your best. With maternity clothes, they’ll make you feel pretty because they’re made to accentuate your favorite parts and show off your cute bump if you want. Plus, you’ll be more comfortable, which is the most important part. So don't stress yourself out over having to buy maternity clothes. You're pregnant and are supposed to grow.

How many maternity jeans do you actually need to own — or maternity outfits — really depends on the woman. How often she can do laundry, her job, and her comfort level. How many outfits and pants do you wear in a week? How often is it the same pants? I think then you’ll have your answer, especially since maternity wear is stretchy enough to grow with your pregnancy.