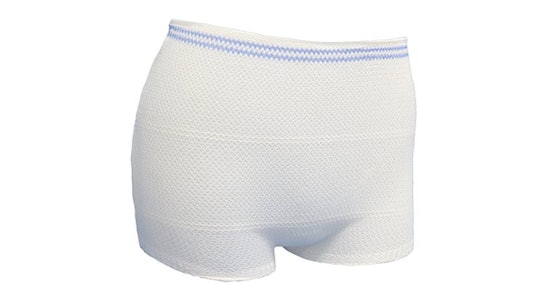 For many, the term "mesh underwear" conjures up a very specific set of memories. For me, it's a hospital room in lower Manhattan, holding my baby at long last, and feeling empowered, exhausted, elated, and anxious all at once. My body was tender from childbirth and I was terrified to use the bathroom. But I had on mesh underwear, and they were a saving grace. If you're preparing for childbirth, you might be wondering how many mesh underwear you need, and let's just say you can't have too many.

For the uninitiated, mesh underwear look like boy shorts made out of netting and they're super comfortable. They are high-waisted, to gently hug your postpartum belly (because you will still look about 5-months pregnant after childbirth), and they're specifically designed to hold those ginormous postpartum pads in place. Yes, there will be bleeding — you can chalk that up one of those things no one tells you about childbirth. Fortunately, these magic mesh underwear are entirely, gloriously disposable. If you leak (and you will) you can simply peel them off and discard them, without a moment's hesitation.

However, it should be noted that while these mesh panties will feel like a gift from a postpartum fairy, that fairy is kind of stingy. Unlike peri bottles and pads, which I seemed to be swimming in at the hospital, I got maybe a handful of mesh underwear during my entire hospital stay. I don't think I was sent home with any extra pairs, although that stretch of time is pretty fuzzy! To be on the safe side, and to ensure you have plenty of these comfy, disposable underwear at the ready when you come home from the hospital, it's a good idea to buy extra. We all heal at different speeds, but you can at least anticipate that you'll go through at least 3-5 a day for a few days.

You can find quite a lot of affordable options on Amazon, and many come in packs, so you conveniently get like 10 at a time. You can search for either "maternity mesh underwear" or "incontinence underwear" since many are designed for both scenarios.

The cool thing is that these postpartum undergarments are starting to get a little bit more normalized. That's in part due to Chrissy Teigen's now infamous "Asian Pear" instagram post, where she modeled the mesh undershorts while holding an asian pear wrapper, an analogy that came from fellow mama, and hilarious stand-up comedian, Ali Wong in her Netflix special, Hard Knock Wife.

There's even a popular hashtag on social media, "#meshundies," used by new mamas donning the hospital underwear, including one of actress Kristen Bell with her doting husband Dax Shephard. Mesh underwear is a very real part of postpartum life, and I love that it's now seen as a badge of honor.

There's even a this hilarious meme that says, "You never forget the nurses that help you put ice packs in your mesh undies," and I don't think truer words have ever been spoken.

More Like This
Turns Out, You Can Dilate Pretty Far Before You Actually Go Into Labor
Pitocin Induction: What It Is & The Play-By-Play
This Is How Your Water Breaks During A C-Section
Can You Do Zumba While Pregnant? Experts Weigh In