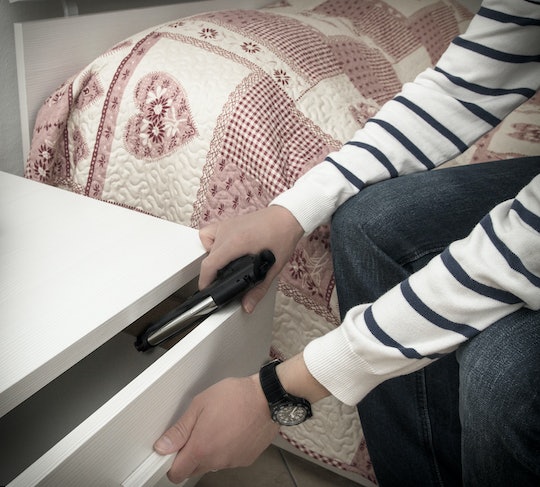 Here's How Many Millennials Keep Guns In Their Homes

Feb. 14, 2018 marked the 18th school shooting in America since the beginning of the year. This time, 17 people died when a gunman entered Marjory Stoneman Douglas High School and opened fire. According to media reports, he even triggered the fire alarm to draw people out of their classrooms for the most casualties. It was horrific, it was awful, and it just keeps happening. How does a person look to the future with anything other than abject hopelessness in the face of so many preventable tragedies? What about the next generation, for instance; how many millennial families have guns in their homes? Will this awful cycle continue to turn over and over again?

It seems the answer is murkier than you might expect. Millennials have been widely credited for leading the charge against racism in the 2016 presidential election, standing shoulder-to-shoulder in defense of such social issues as gay marriage, women's reproductive rights, and transgender rights, all of which tend to be considered "leftist" views. Yet their views on gun control were not nearly as cut and dry.

According to a 2017 Pew Research survey about gun ownership trends, 27 percent of people aged 18 to 29 years old own a gun in the United States, which does not offer much of a statistical difference to gun ownership in older generations. Furthermore, 30 percent gun owners with children under 18 living at home reported that "there is a gun that is both loaded and easily accessible to them all of the time when they’re at home," according to the Pew Research survey.

So what is the deciding factor the survey found behind the millennial's decision to purchase guns? Instead of wanting to own a gun for home protection, the reason most often cited by older people, Kim Parker, Pew Research director of social trends told NBC News that millennials were more interested in guns for sporting purposes. According to the same Pew Research Survey, 13 percent of gun owners between the ages 18 to 29 belong to a hunting club. Parker explained to NBC News:

Millennials also appeared to be the largest demographic to support the right to carry concealed carried weapon legislation put forth by the National Rife Association, according to a 2015 Gallup poll questionnaire. Millennials supported the legislation a full 10 percent more than the next demographic.

There's another reason why millennials could be buying guns, according to UCLA professor of law Adam Winkler, who authored the book Gun Fight: The Battle Over The Right To Bear Arms In America — video games. As NBC News reported, Winkler explained:

A lot of kids today are brought up on first-person shooter games. They have an interest in guns because they're such a big part of their virtual lives.

While millennials might be interested in guns at the shooting range for target practice, many support safer gun reform. A 2017 survey conducted by apartment-listing site Adobo found that 78 percent of millennials questioned believed that it was too easy to purchase a gun in the United States, while 59 percent thought stricter gun legislation would decrease gun violence. As Winkler pointed out to Politico, these apparently conflicting views millennials have about guns are in keeping with the messages they receive on a regular basis.

It kind of reflects that sort of divided identity on guns — that guns can make you safer, and thus they support concealed carry. At the same time, they recognize there’s a serious gun problem in America, and … they think that more should be done to keep guns out of the hands of people who can’t be trusted.

The reality is this; millennials, much like the older generations, are a demographic made up of individuals with their own independent view of the world. They can't be pigeon-holed as "all" being one way or the other. We can't expect this generation to solve every gun-related problem there is; nor can we blame them.