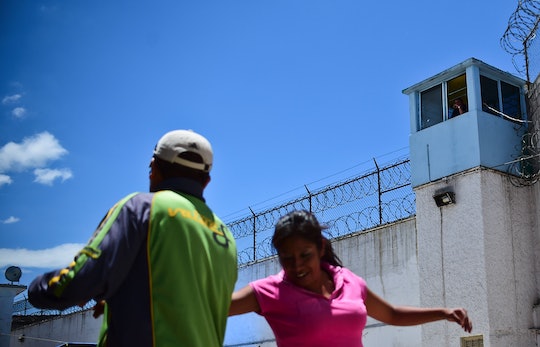 How Many Moms Are Incarcerated? They're The Fastest Growing Group In U.S. Jails

A whole lot has changed since 1970s. Bell-bottom pants have gone in and out of style at least 17 times, a woman might become President of the United States, and the internet is now sort of a thing. And oh yes, way more moms are being incarcerated these days. So that's changed too.

It turns out that in 1970, there were around 8,000 women in jail (and women can be moms so stay with me here). As of 2016, a new report by the Vera Institute of Justice and the Safety and Justice Challenge found that number had grown by about 13 times, to 110,000 women currently being detained. And of those 110,000 women, 80 percent are mothers of small children.

More concerning is the fact that 80 percent of the crimes these women committed were non-violent crimes. The women incarcerated for these crimes are mostly Black and Hispanic, according to the study, and many of them are reportedly suffering from mental or physical illnesses and substance abuse. Approximately one-third of the women being incarcerated are dealing with severe mental illnesses like schizophrenia, bipolar disorder, or depression — more than double the rate that has been found in men who are incarcerated.

Elizabeth Swavola, the main author of the report, explained to The Huffington Post that, despite the disturbing upswing in women being incarcerated, there is barely any data to speak of. "Because the research is pretty old and scarce," she said, "we had to cobble together a portrait."

The portrait the report has cobbled together is disturbing to say the least. Not only are there far more women in jail than ever before (and the numbers continue to climb) but those women are at an extremely high risk for being sexually assaulted. The report found that, between 2009 and 2011, correctional facility staff was 87 percent male, and 67 percent of women in jail had been sexually assaulted by a staff member. Some of these women end up seeing their situation as utterly futile and turn to suicide, according to Swavola.

Women tend to leave jail more damaged than men do after their time being incarcerated, Swavola found. Because the women are "encountering a system that was created for the majority of people who are in the criminal justice system, who are men."

"It doesn’t really account for the differences that women bring to the system," Swavola explained.

The study by the Vera Institute (funded by The MacArthur Foundation) has raised a whole host of questions. How did the justice system manage to fail women so utterly and so consistently without any real accountability? How will the next generation of children who are being raised while their mothers are incarcerated fare in the world if the justice system does not change? And, most importantly, how do we go about making real change happen right now?