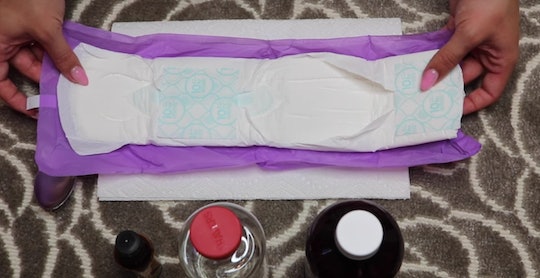 If You're Making Padsicles For Postpartum Care, Here's How Many You'll Want To Make

There’s a lot going on when it comes to early postpartum life. There’s learning everything about your new baby, and bonding and creating some sort of routine, and there’s a lot of healing going on. Whether you delivered vaginally or had a C-section, you can absolutely expect bleeding for a bit. And if you delivered vaginally, you'll probably be sore and most likely torn, and will need some extra TLC. “Padsicles” seem to be the rage on postpartum message boards for new mamas, but you may be wondering how many padsicles to make. I mean really, you've only got so much room in the freezer.

Well, the number of padsicles you need really depends on how long you’re bleeding and the general number of pads postpartum women go through in a day. So I asked OB-GYN Jamil Abdur-Rahman, one half of the the twin doctors duo from TwinDoctorsTV, to get more information about the general timeline of postpartum healing, and how many pads most of his patients went through during the healing process. But first, if you’re wondering what the hell a padsicle is, I’ve got you covered.

A padsicle is a sanitary pad (like Always, or whichever you prefer), that’s been slightly soaked in witch hazel and aloe vera. It’s important to not completely soak the pad, however, because then it will feel like you’re sitting on an ice cold rock — and how unpleasant would that be, right? The way it works, according to Abdur-Rahman, is “the witch hazel functions as a desiccant that leaches fluid out of the vulvar and vaginal tissue. By leaching fluid out of this tissue, witch hazel helps to lessen and/or eliminate swelling." The aloe vera helps with the hot burning sensation and cools the area. “In [using these padsicles], it eliminates a great deal of the pain many women feel after having had a vaginal delivery,” Abdur-Rahman adds.

So how many pads could you potentially need postpartum? “While it varies from person to person, during the first 24 to 48 hours after delivery, she may go through a pad every one to two hours,” Abdur-Rahman explains. “After 48 hours have passed, a woman having recently delivered a child will typically go through a pad every three to five hours for the next two to three days. Once the first four to five days have passed, most women will only require an ordinary menstrual pad.” As for how long you could potentially bleed postpartum, Abdur-Rahman says the heaviest part happens in the first week or so. “After that, a woman may experience bleeding that ranges from spotting to menstrual-like for the next three to four weeks. By six weeks postpartum, most postpartum bleeding has resolved.” However, like I said, it is super important not to over-freeze the pads. They’ll be way less absorbent of your blood in addition to being uncomfortable.

When I took a poll of women who had vaginal deliveries, all but one said they didn’t make padsicles, with one mom saying she liked the cold pads she was given in the hospital, but after two of those, she was good. Another mom said she made 10 of them and they worked pretty well until they fell apart like diapers, but she liked regular ice packs better. She also said to beware of where you’re keeping them frozen, because her dad went to grab a beer from the cooler and was surprised to find padsicles. Awkward.

If you deliver via C-section, you won’t necessarily need padsicles, but you’ll still need pads, though you will have less bleeding, according to Abdur-Rahman. “This is in large part because during the C-section, once the placenta has been removed, the OB-GYN will manually clean the uterus out. This functions to remove a great deal of the uterine lining that typically passes over the next three to five days. With this lining having been manually removed during the C-section, the postpartum bleeding that follows is typically much lighter.”

As long as you don’t oversaturate or over-freeze your padsicles, you can expect, on average, to go through a pad every one to two hours, and after 48 hours have passed, you will typically go through a pad every three to five hours for the next two to three days. Good luck and please take good care of your sore area. They, and you, have been through a lot.

More Like This
Why Does My Baby Cough While Breastfeeding? Experts Explain
Banana Boat Sunscreen Has Recalled Products That Were Found To Contain Benzene
How To Avoid & Treat Lyme Disease
In Search Of New York City's Most Luxurious Birth Experience