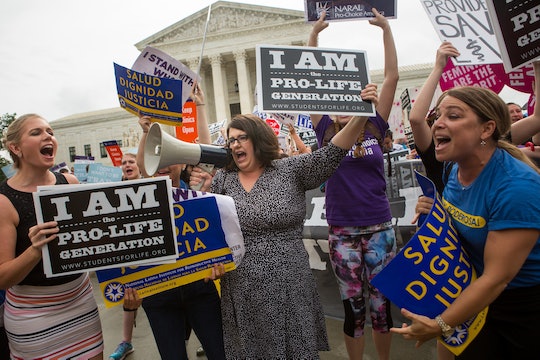 True Pro-Lifers Are Now The Minority

The March For Life, the annual anti-abortion demonstration in opposition to the Supreme Court's 1973 Roe v. Wade decision, is set to descend on Washington, D.C. on Friday, and many are wondering how the crowd size will compare to last week's Women's March. So just how many people are pro-life? It turns out that the way the question is framed can make a big difference. And although President Donald Trump cited his favorite source, "some people," as evidence that the March For Life would be bigger than the Women's March, it's highly unlikely. When applying for a permit, the organizers told the National Park Service that they expect 50,000 participants, according to NBC News. By comparison, the Women's March drew an estimated 500,000 in Washington alone.

Trump's crowd size estimates are, as always, vastly different. On Thursday, he said, "They'll have 300, 400, 500, 600 thousand people. You won't even read about it. When other people show up, you read big-time about it. Right? So, it's not fair, but nothing fair about the media," according to USA Today. I'll wait while you re-read that and try to make sense of it. But the fact is, the majority of Americans are not anti-abortion. In more than 40 years of polling, the notion that abortion should be illegal in all circumstances has consistently been the most unpopular opinion, according to Gallup. It peaked in 2009 at 23 percent, and its latest poll, in May of 2016, shows that just 19 percent feel that way.

However, things get a little trickier when you frame the question in different ways. When asked whether they consider themselves pro-choice or pro-life, 46 percent responded pro-life. But 27 percent of them apparently don't feel strongly enough that they feel that abortion should be illegal. That implies that most so-called "pro-life" people aren't actually anti-abortion; they accept that abortion is a choice, and what they might choose for themselves shouldn't be forced upon others. Which would really make them pro-choice, wouldn't it? (Yes, it would.)

These confused, conflicting views are mirrored in the president himself. While he's most recently claimed to be anti-abortion, he's flip-flopped many times over the years. According to the Washington Post, he sponsored a dinner in 1989 honoring Robin Chandler Duke, a former president of NARAL. In 1999, he told NBC's Tim Russert that he was "pro-choice in every respect," and when asked if he would ban "partial-birth abortion," a term invented by anti-abortion extremists to stigmatize late-term abortion, he said no. However, once he decided to run as a Republican, he changed his tune an incredible five times in three days. First, he told MSNBC’s Chris Matthews that women should be punished for having abortions. Then, he issued a statement saying it should be up to the states. An hour later, he issued another statement saying it should be up to Congress. Two days later, he told CBS, "At this moment, the laws are set. And I think we have to leave it that way." Later that night, he issued a third statement saying he would change the law. So who is actually anti-abortion in the end? A very small minority that probably doesn't even include the president.