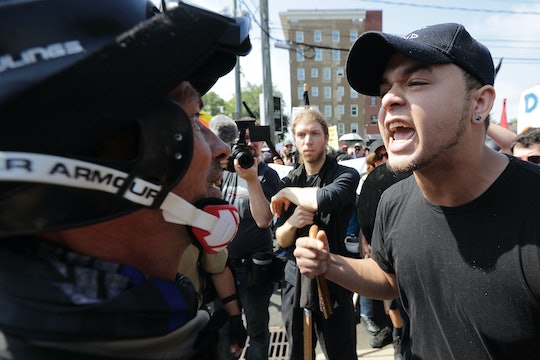 How Many People Were Hurt At The Alt-Right Rally?…

It looked to be a positive end to a terrible morning. After an alt-right rally in Charlottesville turned violent, Local law enforcement officers got control of Emancipation park and demonstrators were dispersed. Some peaceful protesters remained... and that's when things changed. A car crashed into protesters in Charlottesville on Saturday after the rally was cut short, and several people are reportedly in critical condition.

A group of counter-protesters took to the streets in the aftermath of the proposed alt-right rally. They were reportedly peacefully demonstrating when a grey car crashed into the crowd through the city's Downtown Mall area around two o'clock. The car sped up upon entering the crowded street and rammed another vehicle, which hit several people and saw them flying in the air. According to NPR and video footage from social media sites, several people were injured in the crash. Police and medical personnel were reportedly on scene, and people were treated for injuries on the spot. The grey car, which reversed from the scene and attempted to drive away, was reportedly pulled over by police, according to Daily Progress reporter Dean Seal. Nine people were struck and injured by the vehicle, Seal reported on Twitter, although the severity of those injuries remains unknown.

The alt-right rally, "Unite the Right" ended around 11:40 am, with 500 white nationalist and white supremacist protesters, apparently incensed over the vote to remove a statue of Confederate General Robert E. Lee, leaving Emancipation Park in Charlottesville. This abrupt end to the protest did not sit well with alt-right organizer Jason Kessler, who told CBS News that he planned to sue the city for breach of contract. He felt the group's First Amednment rights weren't being honored. A federal judge had granted Kessler's group the right to assemble, but Gov. Terry McAuliffe declared a state of emergency when violence quickly erupted on Saturday morning between various factions of the alt-right community.

At this stage of the game, we don't know if the car crash was intentional. We do know this; the majority of the violence had been curtailed. People were marching peacefully through the streets to protest the hateful rhetoric spewed by some of the attendees (former KKK grand wizard David Duke was in attendance, as was white supremacist leader Richard Spencer).

These people marched peacefully, until a car came careening through the crowd. Intentional or unintentional, Saturday was not a good day for America, folks.