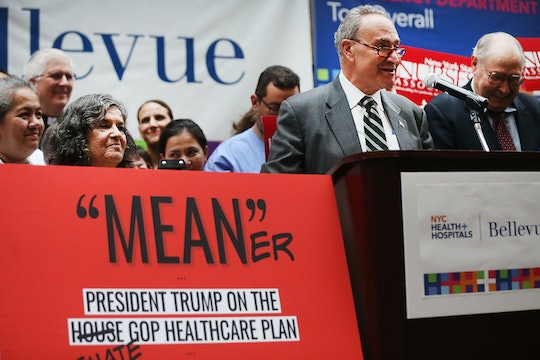 The BCRA Could See Millions Without Medicaid

After House Republicans were narrowly able to pass the American Health Care Act, their effort to repeal and replace the Affordable Care Act, last month, the Senate stepped in. Decided to try their hand at writing a health care bill that could realistically replace the ACA (also known as Obamacare). Their effort to repeal, called the Better Care Reconciliation Act and authored by Senate Majority Leader Mitch McConnell, has already proposed some shocking changes. Not the least of which being the jaw-dropping number of Americans who will lose Medicaid under the BCRA.

The Senate bill, which was penned in secret by McConnell and 12 other (all male) Republican senators, aims to phase out the Medicaid expansion to millions of low-income Americans by 2021. The ACA expanded Medicaid coverage, which was previously limited to specific groups of people like pregnant women, the blind or disabled, to cover any American living below 138 percent of the poverty line. This expansion helped millions of low-income Americans in all of the 31 states that chose to participate, as well as the District of Columbia. Under the ACA, the federal government foots 95 percent of the bill for Medicaid. If the BCRA is passed (and that's a pretty big "if"), the federal government would aim to roll back their involvement to around 50 percent.

The Congressional Budget Office (CBO) projected on Wednesday that this reduction in federal funding for the Medicaid expansion could see fewer states opting to take part in the program. It could also mean states that have already taken part in the program might choose to discontinue their involvement if asked to pick up a significantly larger tab for Medicaid than under Obamacare.

This would mean millions of people could lose Medicaid funding. The CBO plans to unveil its official score for the BCRA early this week, and with the score will come a clearer idea of exactly how many Americans will lose their Medicaid coverage if the Senate health care repeal is enacted. The CBO said in a statement:

CBO and the staff of the Joint Committee on Taxation are in the process of preparing an estimate for the Senate health care plan and aim to release it early next week. The estimate will be published on CBO’s website.

President Trump himself reportedly sat down with Senate Republicans and asked them to be a little kinder than the House Republicans had been with the AHCA. According to CNN, he asked the senators during a White House luncheon to write a health care bill that was "kind, generous, and with heart."

Apparently, the GOP didn't think he meant they should have a heart for millions of Americans who desperately need health care.