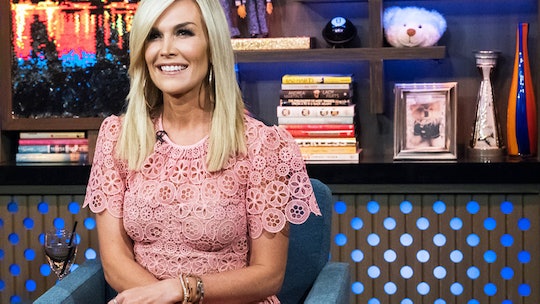 The Real Housewives of New York City star, Tinsley Mortimer, has been in an on-again-off-again cycle with her beau, Scott Kluth, for about two years now. But it's possible that couple officially called it quits this time. Following a reality check from Bethenny Frankel and a preview of Tinsley admitting to Luann de Lesseps that the couple went their separate ways, all eyes are on Tinsley and Scott's relationship. But how many times have Tinsley and Scott broken up? Honestly, it's too many to count.

You can thank RHONY alum Carole Radziwill for introducing her co-star to the CouponCabin CEO. Carole set the couple up on a blind date back in Season 9. While there was an immediate connection, Scott lived in Chicago — almost 800 miles away from New York City. And as anyone who has been in a long distance relationship could understand, the mileage between them was hard.

Since getting together, Scott and Tinsley have reportedly broken up at least three times. However, when Tinsley appeared on Watch What Happens Live with Andy Cohen in Jun. 2018, the RHONY star admitted that she and Scott "break up all the time." So it's probably safe to say that Tinsley and Scott have called it quits more times than the media thinks.

The first time Tinsley and Scott broke up was in Oct. 2017. In an interview with E! Online, a source cited long distance as the culprit.

"The long distance just became really difficult," the insider said. "Tinsley is focused on reestablishing her life in New York. They had a lot of fun, and who's to say if it's definitely over for good? I could see them getting back together at some point."

And so they did. Down the line, Tinsley and Scott got back together, but their relationship didn't last long. In Jun. 2018, the couple split again. During a segment on Watch What Happens Live with Andy Cohen, Tinsley shared the news of their breakup. Again, she mentioned the long distance.

"We are on a break right now. Look, it's so hard to be in a relationship, particularly when we don't live in the same town. He's in Chicago, so busy with CouponCabin," Tinsley explained.

Although the couple eventually found their way back to each other, Tinsley is now single. In Feb. 2019, Us Weekly reported that Tinsley and Scott split and the RHONY star is dating around.

“The breakup with Scott was heartbreaking for her,” a source told the publication. “All of Tinsley’s friends are trying to set her up with guys, but no one serious yet.”

The breakup between Tinsley and Scott might have happened earlier this year, but it's fresh in the minds of RHONY fans. In the Apr. 17 episode of the Bravo reality series, Bethenny Frankel, Sonja Morgan, Dorinda Medley, and Barbara Kavovit play a game of truth or dare, which eventually leads to a confrontation about Scott.

“Tinsley, you can’t just be happy when it’s on his terms," Bethenny told Tinsley in the episode. "It doesn’t work that way."

When Tinsley shot back that "it does in his life," Bethenny responded, "It’s not going to work in your life." Following this, Tinsley broke down in tears and the women gathered in support of their friend.

In a clip for the upcoming RHONY episode airing on Apr. 24, Tinsley tells Luann that the confrontation led her to call Scott.

"After everything that happened at Bethenny's, I ended up calling Scott and said to him, 'I need more from you. I just need you to be here. Just come to New York,'" Tinsley revealed in the clip. "And he said no."

While the news of the breakup is heartbreaking to hear, in the clip, Tinsley also admitted that she felt strangely relieved. And seeing as her relationship with Scott has been complicated from the start, I don't blame her. So now, Tinsley — and fans — can finally let out a sigh of relief and move forward.