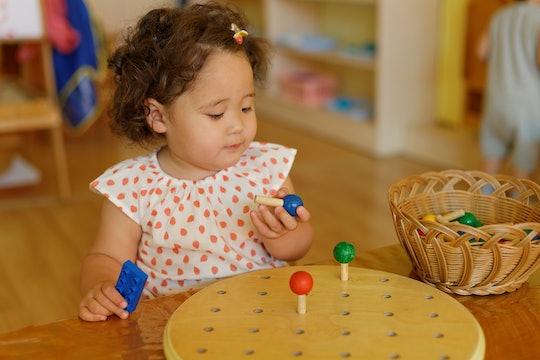 If I were to ask a small child how many toys he or she really needs, they would likely direct me to the poster for the 1999 James Bond film The World Is Not Enough. Because of course, for them, the more toys jammed onto shelves, the better. Bring on the toystoystoys... But when I ask, say, a Montessori teacher how many toys a kid really needs, the answer differs slightly.

The Montessori method is known for its minimalist approach to playthings. And on the surface, it can sometimes seem like it consists of giving a child a small wooden box and an old shoelace to play with, and then ignoring them for several hours. But there is a bit more to it than that.

Founded by Dr. Maria Montessori, this educational philosophy has been on the go for over a hundred years now. The American Montessori society describes it as thus: “Within the community of a multi-age classroom—designed to create natural opportunities for independence, citizenship, and accountability—children embrace multi-sensory learning and passionate inquiry. Individual students follow their own curiosity at their own pace, taking the time they need to fully understand each concept and meet individualized learning goals.”

That's a very fancy way of saying it's all about keeping things simple, and letting activities be led by the child. According to the North American Montessori Teacher's Initiative, there are around 20,000 Montessori schools around the world. (Fun fact: Jeff Bezos, P. Diddy, and Julia Child all attended Montessori schools. And yes, that is a dinner party I would like to attend, even though it sounds rather exhausting.)

I reached out to Simone Davies, an Amsterdam-based Montessori teacher, mother of two, and author of The Montessori Toddler. Davies is all about implementing Montessori at home, and even offers workshops on how to set up one's house Montessori-style.

When I asked Davies exactly how many toys a kid really needs, she said, "I usually recommend keeping out as few as six to 10 toys. Where there are siblings, this might be six each. The exact number is not specified in any Montessori literature — we use observation to see if the child is overwhelmed or needs more."

At this, I imagine my child throwing his head back in laughter at the austerity of this (clearly barbaric) suggestion. "Six toys? Hilarious. Now come, Mother, let us go blanket the floor in both Magna Tiles and Mr. Potato Head pieces..."

Why so few toys? Says Davies, "We apply the principles of less is more — the child can clearly see what is available when they are displayed on the shelf with one activity per tray. Rather than a big toy box that gets emptied on the floor. Or too many toys they don’t know what to choose and never have any variety."

I must admit, I love looking at Davies' Montessori-styled rooms. They're just so aesthetically pleasing — so light and airy, with lots of blond wood and gauzy curtains. It’s what I fantasized my own child’s bedroom would look like... back in the early days... before his actual bedroom began to resemble the storage closet of a Party City.

Now, there are times I walk into his room and want to put all of it — the rubber cockroaches, the Hot Wheels, the cupcake squishees — out into the street, leaving him with a single wooden wheel to roll back and forth. Until that day, I shall try to implement some of Davies' ideas for toy rotation, and keeping other toys put away and out of sight. Which is tricky in a Brooklyn apartment. So actually, maybe I'll just hang some gauzy curtains and call it a day.