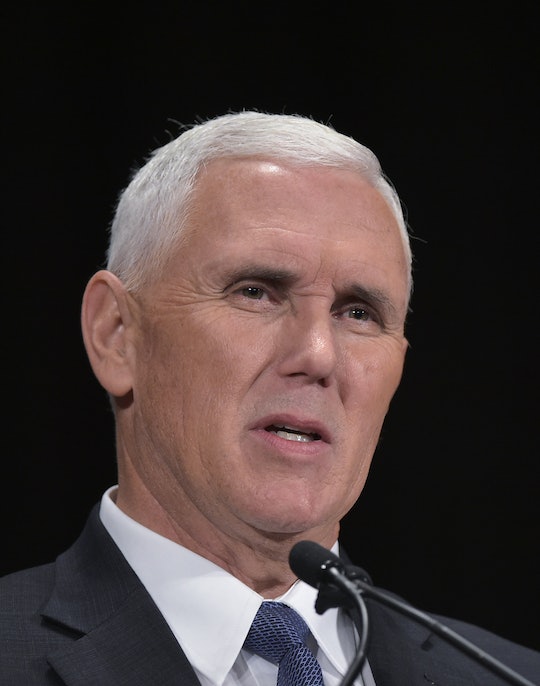 How Many Vice Presidential Debates Are There? Not As Many As You'd Think

The big presidential campaign news of the moment, of course, is the upcoming debate between Democratic candidate Hillary Clinton and Republican candidate Donald Trump. I won't lie to you; I'm more excited about this than I was to see Luke Skywalker's epic lightsaber duel with Darth Vader and I was only 7 when I saw that. So you can imagine. But what about the potential vice presidential debates? Will we see them square off as well, or will it be more like old-timey duels, where they will act as seconds in case their partner gets ousted?

No, unfortunately that is not the way this cookie crumbles. While Clinton and Trump are scheduled to face off in a series of debates beginning Monday, Sept. 26 in Hempstead, New York, there will only be one vice presidential debate. The vice presidential candidates will have their chance to strut their stuff for viewers on Oct. 4 at Longwood University in Farmville, Virginia. The debate will begin at 9 p.m. Eastern Time and will last for 90 minutes, airing on NBC. Facebook and Twitter will also be livestreaming the debates. There are nine sections to the vice presidential debate, each section 10 minutes long. The debate will be moderated by Elaine Quijano, CBSN anchor and correspondent for CBS News.

Kaine has reportedly been practicing his debate responses, with lawyer and agent Robert Barnett playing the part of Mike Pence, according to Politico. Barnett has experience with debate prep, as he played the part of Vermont Sen. Bernie Sanders in mock debate sessions with Hillary Clinton. Barnett has done his due diligence, studying Pence thoroughly (also known as The Quiet One on the Republican ticket).

Pence has, rather interestingly, been using Wisconsin Gov. Scott Walker in his debate prep. Walker had a very brief campaign in the 2016 election, but was the first to bow out. He is also noteworthy as one of the few establishment Republicans to throw his weight behind Trump at the Republican National Convention, according to CNN.

While the debates between Clinton and Trump promise to be riveting, this vice presidential debate should prove enlightening as well. Kaine and Pence have remained very much shadowy, background figures. It will be interesting to see how they do with their time in the sun.