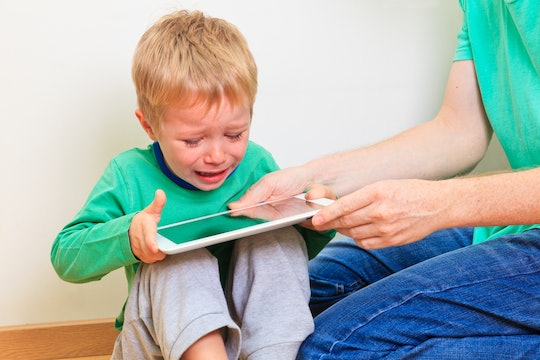 How Millennial Moms Discipline Style Holds Up To Other Generations

If there's one thing that every generation has in common, it's that they love to look down their noses at the generation after them. Especially when it comes to parenting decisions. Millennial parents are frequently and loudly judged by their previous generations for pretty much doing everything wrong. And far too many people seem to want a say in how millennial parents are faring — especially when it comes to discipline (or what they perceive as lack thereof). The reality is that yes, millennial moms do discipline differently from previous generations as a whole. But is that actually a bad thing?

The accepted wisdom appears to be that millennial parents — which have finally surpassed baby boomers as the largest population demographic on the planet — are just too soft. Too easy on their kids, too quick to turn the other cheek or a blind eye if their little one is misbehaving. This is quite clearly a massive over-simplification. After all, no two parents ever discipline the same way, do they?

Even within the same households, there are always going to be subtle but noticeable differences in parenting expectations and goals. And with the advent of the internet, millennial parents have to deal with concerns no other previous generation could have ever imagined. Still, every generation seems to have their own subtle trends, and it might surprise you to see how similar they tend to be.

This was the generation of parents who lived through the Great Depression and World War Two. In other words, this generation saw some sh*t go down on a regular basis. Their parenting style, by and large, was a little more hands-off out of necessity; parents from this generation didn't have time to wonder if their kids were turning out alright. They had to figure out how to survive. As did their children. This generation tended to expect kids to "work things out for themselves" if they were fighting with siblings, struggling in school, getting bullied... figure it out.

Whining was not tolerated, and hard work wasn't considered a form of punishment, but a way of life in this time, according to Macleans. Which actually brings to mind the chore charts many millennial parents encourage their children to use. Hmm.

Ah, the generation of free love, peace, and Woodstock. This generation might disapprove of millennial parents and their supposed "gentle" discipline tactics, but, as research suggests, they were the original generation to really think about how their parenting might affect their children.

According to the Los Angeles Times, they prided themselves on being more idealistic and more open-minded than their parents. Although, as Patrice Apodaca for the Los Angeles Times, wrote: "We introduced the concept of micromanaging the heck out of our kids, overwhelming them with carefully choreographed experiences to nurture their budding Einstein brains and future Hall of Fame prospects."

Definitely more willing to embrace individuality than before.

Gen-X'ers were the generation of latch-key kids; divorce became far more pronounced in the 80s, leaving more than double the number of single-parent households, according to the New York Post. While their baby boomer parents might have been more cautious about heaping too much responsibility on them, many parents were also happy to leave their kids to their own devices.

This was the "sticker" generation; the one that wanted constant recognition for everything, according to HuffPost. And it translated into their parenting. Again, they struggled to discipline their children, but also became over-protective (after school specials about kids being kidnapped didn't help much).

Gen-X'ers, much like millennials, were trying to find their own way of parenting by learning from their previous generations.

Some might say that millennial parents are suffering from information exhaustion. Social media sites, mom groups, message boards, studies seemingly cropping up on the daily with new ideas about how best to raise your child — it is exhausting. Plus, millennial moms are smart; more millennials have college degrees than any previous generation. The result?

Mothers who want to make educated, informed choices about discipline. They don't want to lose their tempers because of exterior causes of stress. According to a Goldman Sachs report, millennial moms are doing more with less time, but are also wise enough to take "me" time when they can. Sure, millennials have a tendency to over-schedule their children, but they also tend to be gentler and focus on more positive parenting styles than their predecessors because quality time is at a premium.

Across the board, millennial parents seem to be trying to work towards a gentler form of discipline. They tend to believe in encouraging a democracy in their homes, and plan to rely less on archaic forms of discipline like grounding and spanking (although a fair amount of millennial parents still believe corporal punishment should be allowed, according to a 2015 survey by The Washington Post).

In other words, millennial moms are trying to make the best with what they're given and use the resources they have. Much like the mothers of generations before them.