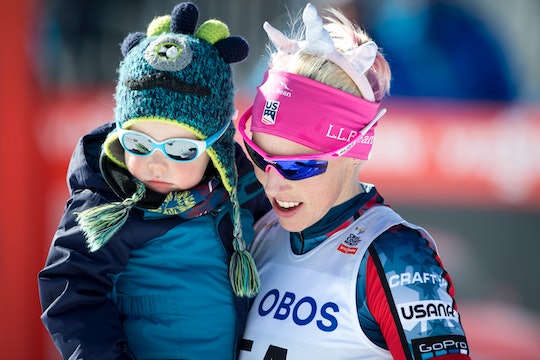 Kikkan Randal of USA with her son after Ladies 10.0 km Pursuit Free at Lugnet Stadium on March 18, 2018 in Falun, Sweden. Photo by Trond Tandberg/Getty Images.

When Career & Kids Collide In A Big Way, This Is How Moms Manage

Cross-country ski champion Kikkan Randall managed to sneak having a baby into her training schedule between the 2014 and 2018 Winter Olympics. "I had put in all the hard work, and it was just getting to the fun part, where you could really put all that work into action," she tells Romper by phone of seeing years of training finally paying off. "But at the same time I also knew I wasn’t willing to wait another four years to wait to start a family." Elite sports and pregnancy weren't exactly complementary — no guidance existed on how to achieve two disparate goals, so to speak.

So she mapped out a schedule herself. "I knew this was a unique opportunity to combine my life as an athlete — to make a push for one more Olympics — and to combine that with motherhood." The gambit paid off in February of 2018, when she won her first gold medal in Pyeongchang for the women's team free sprint, as then-2-year-old son Breck watched on from overseas. Then, in May 2018, she found out she had breast cancer.

"I was so psyched on life, psyched to be a mom, psyched to be here starting our life here together. And then I was getting ready for bed and just happened to notice it," she told the New York Times' Christopher Clarey of the lump that foretold the next challenge. Randall tackled cancer treatment with the fervor you might expect of an Olympic champion, and "rang the bell" on her infusion treatments in July of this year.

She is exceptional, but her story is instructive for any mothers chasing after her goals: there is no perfect time and no fairytale finish, just hard work and (hopefully) good technique.

Under the best circumstances, work and home life collide. “I invite work friends into my family life and I bring my kids along on work trips, when possible,” says Katherine Lewis, a journalist and author of The Good News About Bad Behavior: Why Kids Are Less Disciplined Than Ever — And What To Do About It. “It's led to fun opportunities for my children, like when my daughter got to play a meteorologist when I did a TV interview in Boston." Another time, her son was on the radio with her in Seattle.

The launch of her book was Lewis’ most intense period of her career, and saw her give 60 talks across the country inside 14 months. She says if she didn’t bring her family along, she would have hardly seen them in that time.

"When we’re crazy and exhausted and frustrated, we have to remind ourselves to do the very things we’re asking other moms to do," say Rielly Karsh and Danielle Davies, Mom 2.0 community members and co-founders of Moms Running, a political organization that provides free resources and coaching to moms who are campaigning. They describe the beginnings of Moms Running as a time of both exciting possibility and terror it would all fail.

I always remind myself that you never hear of dad guilt, so why should women feel like they are doing something wrong if they want to pursue their career as fiercely as men always have?

If you can survive the crush of childrearing and career, there are huge benefits. A recent study by Harvard Business School showed that the daughters of moms who worked make about 23% more than daughters whose moms stayed home. Another study published by Work, Employment and Society found daughters of employed mothers are in more supervisory roles, work more hours, and earn more money as well.

Marcia Page, co-founder of the alternative investment firm Varde Partners, has a net worth of $250 million and recalls the early days of her startup 25 years ago as "a bit of a teeter-totter."

"There were times when it would just fall on one front or the other," Page tells Romper. And while she could outsource some household duties, it was the mental load that was hardest. “That was the piece I didn’t necessarily fully anticipate."

A big piece of the mental load, many of the women Romper spoke to said, is the guilt.

“It’s funny, I don’t think many dads have that guilt. It is what it is — they have to work. But often moms feel like that they should be able to figure out ways to work around [their kids],” says Erica Keswin, author of Bring Your Human To Work and founder of the Spaghetti Project.

“I always remind myself that you never hear of dad guilt, so why should women feel like they are doing something wrong if they want to pursue their career as fiercely as men always have?” Amy Nelson tells Romper over email. Nelson is founder of The Riveter, a women-owned co-working company built in 2017, and recalls being met with skepticism when trying to get the company off the ground (potential investors would ask: “Are you sure you can do this all with three small kids?”).

And sometimes raising tiny humans forces you to harden yourself to that feedback. “The chaotic life of bringing home a newborn forces you to let go a bit,” says Stacey Skrysak, a TV news anchor. “But my late night or early morning feedings are spent with me watching the news or catching up on work emails. So, even though I’m detached, I still find myself connected to my office. That's part of who I am — I'm a workaholic by choice.”

Workaholics or not, what most mothers managing both career and family have in common is they manage it all — except themselves. “Women tend to put themselves last on the list and to more effectively manage the pressures of work and life," says Ali Levine, a TV personality and the voice behind the podcast "Striptd Down with Ali Levine."

She is all for worrying more about how to help parents prioritize their own wellbeing. "They need to make sure that they're taking care of themselves — physically and mentally,” Keswin says.

I’m choosing to be away from my son, so I’ve gotta be efficient and get as much work done as I can.

No one understands that better than Randall, who pushed through pregnancy, postpartum recovery, and an Olympics as someone trying to chart a new course and be the best in the world at the same time. It's a journey she hopes will help other mothers and athletes — she recently launched Elite Athlete Mom to share advice with other athletes trying to do it all.

"Even though my son ... was too young to remember what was going on, you know he gets to be a part of it, someone to tell the stories to," says Randall of training for the 2018 Olympics. "I just kind of felt like, this is a gift to be out here training, and I’m going to make the most of every moment, because I’m choosing to be away from my son, so I’ve gotta be efficient and get as much work done as I can. And then know that that part’s done and I get to come back and be mom."