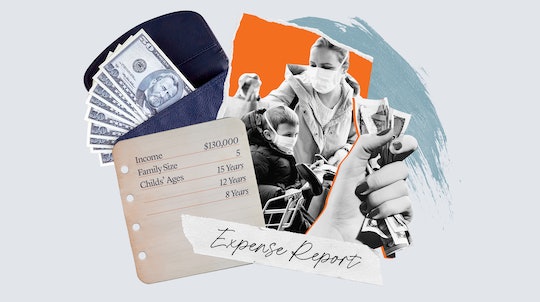 How Much A Family Of 5 In Houston, TX, Spends On Groceries During The Pandemic

While some families are spending much more during the pandemic on entertainment, food, or technology for remote learning, one Houston-area family has found that their grocery budget has drastically decreased since March when life came to a screeching halt. Mom Shelley attributes that to a few key changes.

Family: A mother and father

Before the pandemic, the family was spending an average of $2700 per month on food. This included groceries, school lunches, fast food, and sit down meals at restaurants.

Unlike many Americans, their food costs actually have gone down during the pandemic. Shelley meticulously tracks their food spending, as they are on a strict plan to pay down their debt. Here’s a look at what they were spending before, and what they are spending now.

Prior to the pandemic, the family spent about $700 per month at grocery stores. Shopping in person, it’s hard to resist impulse buys, so some unplanned expenses were part of every trip. Once the shelter-in-place orders came into effect, the family began using Kroger curbside pickup. “They waived all the fees and their app makes it very easy for me to stick to buying only what we need.” Some new foods became a necessity for the family; during the milk shortage Shelley bought chocolate milk, and her kids became hooked on it. It’s become a little pandemic treat they don’t leave out of any order now.

Overall, their grocery store bill has gone up around $200 per month, but it hasn’t affected their bottom line due to other major changes in their spending.

As a family with three kids on the go and two working parents, driving up to a window to be handed a meal was a huge part of their pre-pandemic lifestyle. Prior to March, the family was spending around $1000 per month on fast food, but that dropped drastically as they began their long stay at home. “Our family isn’t juggling sports, band practice, and church activities in the evenings any more so we can plan, cook together and eat longer meals together. That part of the pandemic has been really nice.” She and her husband don’t run through a drive-through on their way into work anymore, either, since they are telecommuting now.

They’ve spent an average of about $550 on fast food since March, which is a huge savings overall. As restrictions eased over the summer in Texas and some activities resumed, their fast food purchases did increase a bit, but still overall lower than usual. They have chosen to continue to avoid sit-down restaurants.

Shelley and her family enjoy restaurants, and miss sitting down to a meal together at favorite local spots. When they were able, they spent anywhere from $500-1000 per month on sit down meals from restaurants. Since March, that number has scaled drastically back. They don’t eat in restaurants at all, but do occasionally order a nice meal to-go for their family. “We do still drink a moderate amount of alcohol at home but buying it at a grocery store versus a restaurant is a big difference, so that makes each meal we order average around $70.” Some of those do include to-go margaritas (a lovely new result of the pandemic) and most include a tip for those essential workers preparing the meal.

Also, kudos to Shelley and her hubby for only drinking a “moderate amount” of alcohol while stuck at home with three kids.

With two careers and three busy kids, packing lunches was not always an easy feat. Shelley’s kids purchased lunch at school often, bringing their average monthly total in cafeteria costs to around $250 per month. When schools shuttered, that cost disappeared. The family did take advantage of the USDA meals provided by their school during the closure, on occasion, but mostly ate at home. Another meal at home per day is part of why their grocery store costs went up a bit, but overall its much more cost-effective to cook for three kids at home than to purchase from the cafeteria. For the 2020-2021 school year, her two older children returned to their middle/high school, while her youngest became officially home schooled. This began as a response to COVID-19, but they found homeschooling just worked better for their daughter. Her boys buy lunch daily at this point, though a recent COVID-19 outbreak in the school threatens its closure again.

Shelley is unsure when her family will resume normal activities, but she has enjoyed several parts of having her kids and husband home more. Less running around, less fast food, more time together at the table, and a significant savings per month.