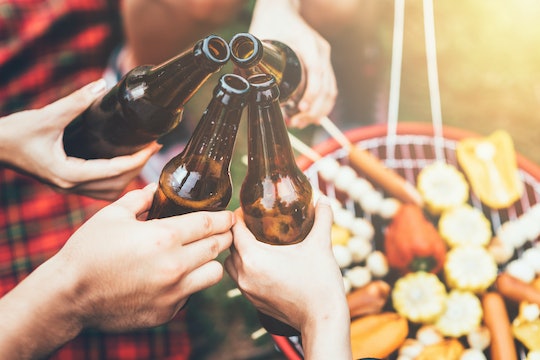 Here's How Much Beer You Can Actually Enjoy While You're Breastfeeding

After spending nine months ensuring that what you eat won't negatively affect your growing baby, there is a switch that goes off following birth and it sounds a bit like, "Party time!" But the truth is, if you're breastfeeding or pumping, then you know that isn't exactly the case. Plus, hello 3 a.m. wake up call. That's because even though your little one is no longer in the womb, there is a new string of Google searches that begins, and it looks something like "Can I eat/drink ____ while breastfeeding?" Like, how much beer can you drink while breastfeeding? And can you eat sushi now?

"Having a beer or two while breastfeeding doesn’t necessarily put your baby in danger," Dr. Sal Raichbach, doctor of psychology and licensed clinical social worker at Ambrosia Treatment Center, tells Romper in an email interview. "While some alcohol does get passed through breastfeeding, the amount is negligible." Raichbach says a good rule of thumb is to wait several hours after drinking to breastfeed. "That way your body has a chance to process the alcohol, and it won't negatively affect your baby," he says.

According to the American Academy of Pediatrics (AAP), a breastfeeding mother's ingestion of alcoholic beverages "should be minimized and limited to an occasional intake but no more than 0.5 g alcohol per kg body weight." That means a mom who weights 60 kilograms (or approximately 130 pounds) should not consume more than 2 ounces of liquor, 8 ounces of wine, or two beers. The AAP also recommends breastfeeding takes place two hours or longer after the drinking alcohol in order to minimize its concentration in the ingested milk.

"The truth is that so many factors impact how much alcohol a nursing parent can have," Leigh Anne O’Connor, an International Board Certified Lactation Consultant (IBCLC) and parenting coach, tells Romper in an email interview. "Alcohol can be dehydrating. The parent's height, weight, and metabolism affects how much they can drink."

Raichbach agrees, adding that "the type of alcohol wouldn’t make a difference, as the potential for danger exists in the amount of alcohol in your system, or blood alcohol content."

According to KellyMom, you don't have to pump and dump after drinking alcohol, a practice that the website noted is more for "mom's comfort" than it is a factor in speeding up the elimination of alcohol from your milk. "In general, if you are sober enough to drive, you are sober enough to breastfeed," Kelly Mom stated, adding that less than 2 percent of the alcohol you consume will reach your blood and milk.

Also notable: La Leche League International (LLLI) explained that alcohol concentration has been found to peak about 30 to 60 minutes after consumption and 60 to 90 minutes when taken with food. "Alcohol also freely passes out of a mother's milk and her system," LLLI stated. That means it would take a 120-pound woman about two to three hours to eliminate one serving of beer or wine from her body.

As for a cold one, O'Connor points out that some people believe a dose of your favorite brew could help with increasing milk. The notion comes from the idea that yeast in beer is thought to be a natural galactagogue, a substance that increases milk supply, and the alcohol in beer supposedly relaxed the mother’s nerves, allowing for a quicker let-down. But experts say there is no research to back up those claims, so the verdict is still out on that one.

As for the sushi, experts say go ahead and eat until your belly is content when you are breastfeeding. Just be sure to go with a bonafide restaurant that serves up quality fish. Can I get an amen?

More Like This
25 Cookie Recipes Without Eggs That Are *Still* Delicious
These 30 Walmart Appetizers Are Super Bowl Snack Goals (Get It?)
14 Recipes For Sick Kids When Everyone's Tired Of Canned Soup & Crackers
When Does A Baby Recognize Their Father? A Pediatrician Explains
What Parents Are Talking About — Delivered Straight To Your Inbox