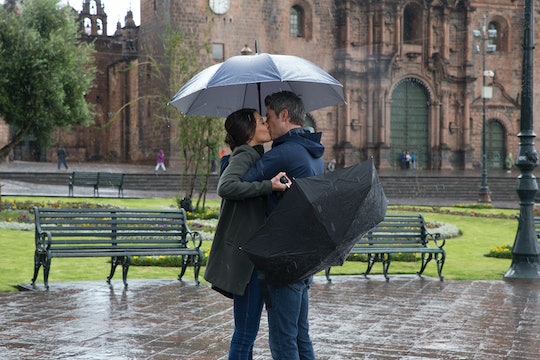 Becca Was Rocking Some Serious Bling On 'The Bachelor'

The finale of The Bachelor always includes an appearance from someone who feels like an old friend: Neil Lane. The famous jeweler came back to bestow Arie's future wife with a ring. But how much did Becca's engagement ring cost on The Bachelor? Arie must've dropped some serious cash for this (just kidding, ABC did).

The last engagement ring Bachelor Nation has to compare Becca's to is Clare Crawley —and her proposal occurred on live television not too long ago. Clare and Benoit got engaged on The Bachelor Winter Games finale, which resulted in seeing a Neil Lane ring get slipped onto her finger.

According to E! News, Clare's engagement ring from Benoit is handmade in platinum, centrally set with an oval cut diamond. The ring surrounded by 84 full cut diamonds for a total diamond weight of 2.3 carats. Doing a little digging on the Kay Jewelers website, a ring that looks just like it goes for around $15,000. To some Bachelor contestants, though, that's chump change. Ben Higgins proposed to Lauren Bushnell with a ring that cost around $100,000. So yes, Neil Lane rings are definitely pricey... and some even reach six figures. Knowing all this, how much does Becca's ring cost? Does hers fall into that range — or is it cheaper or somehow more expensive!?

The nearly 4-carat platinum-set diamond halo ring cost an estimated $80,000, according to Us Weekly. I think we can all agree that's a pretty penny. But judging by the way the finale is going, the ring doesn't stay on Becca's finger. What happens, then? Does Arie pay for the engagement ring? The answer is definitely no, he doesn't finance the ring himself. It's unsure whether ABC pays for it or Neil Lane just gives it to contestants as a gift. Regardless, neither of them will keep the ring.

Why? ABC apparently has it in contestants' contracts that if they break up within two years, they have to give the ring back. Arie and Becca are certainly not the first Bachelor couple to break up shortly after the proposal (they are the first to break up in this way, but I digress), so there are a lot of Neil Lane rings out there that go back. This is what happened with Ben Higgins and Lauren Bushnell when they broke up — and it turns out that they had the most expensive ring of the franchise at a $100,000 price tag.

During the finale, it seemed that Becca wasted no time in getting that ring to "ring heaven." While Arie was breaking up with her for Lauren, she slipped the ring off her finger surreptitiously. I'm not sure what's going to happen to it, but I know what I don't want to happen: for Arie to give the same ring to Lauren. I think that'd be totally disrespectful, and I hope Arie would have the decency not to do that to either of them.

For now, though, Bachelor Nation has to witness this painful breakup. I'm sure in the moment, Becca couldn't give a sh*t about the Neil Lane ring... but thankfully, Arie will probably not end up with it.