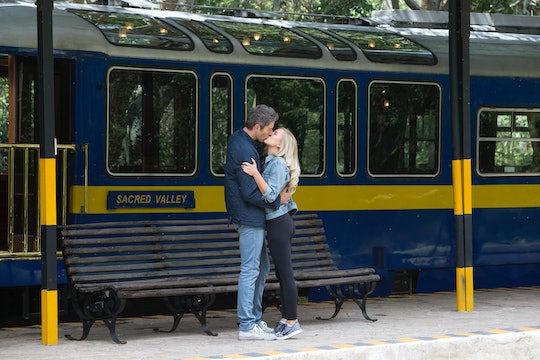 Lauren B. Was Rocking Some Serious 'Bachelor' Bling On 'After The Final Rose'

The hugely controversial season finale of Arie Luyendyk Jr.'s stint on The Bachelor went left at just about every turn. So ABC decided to add a second night to the festivities for viewers to see what happened when Arie tried to get back together with his runner-up Lauren Burnham after breaking off his engagement with Becca Kufrin. Arie did wind up proposing to Lauren, so naturally, fans are wondering: how much did Lauren B.'s engagement ring cost? We don't have many details about the ring yet, but for comparison's sake, the first Neil Lane diamond Arie proposed with, which he said in the finale he could imagine Becca loving, cost a reported $80,000, according to Us Weekly.

Their breakup was excruciating to watch, and one of the most heartbreaking parts was the moment when Becca quietly slipped her ring off in the middle of the conversation. We don't see it happen in frame, but one moment, her hand is in the shot wearing the sparkler and the next minute, it's gone. Even in what was surely one of the most devastating moments of her life, Becca managed to keep her cool and remain dignified. (Many, many Twitter users agreed that they'd opt for a more, uh, violent return of the ring.)

From Arie's cringe-worthy decision to break off his engagement on camera to production's questionable choice to air the raw, uncut, unedited footage of the breakup in its entirety, the three-hour finale still has Bachelor Nation talking. In Peru, where Arie, his family, Lauren, and Becca spent the final days of his Bachelor journey, he picked out the ring he'd eventually give Becca and it was stunning.

Per Us Weekly, "Arie popped the question and gave one of the finalist a nearly 4-carat platinum-set diamond ring worth $80,000. More details: it’s a halo ring with diamonds surrounding the stunning center stone."

It's a gorgeous piece of jewelry, but sadly, according to Bachelor rules, it'll be going back to ABC. (Contracts state that if Bachelor couples break up within two years of the season finale airing, the ring must be returned to production.)

A few weeks into their engagement, and well after they had returned from Peru, Arie realized that he still hadn't moved on from his romantic feelings for Lauren. In fact, he said, the longer he stayed with Becca, the more he felt like his chances with Lauren were slipping away. (Which like, um, yes, that's what's supposed to happen when you get engaged! You shot your shot!) He decided to break it off with Becca to try and make things happen with Lauren. The finale left us on the verge of Arie's attempted reconciliation.

Of course, we came to find out that Arie and Lauren actually had a conversation before he dumped Becca in which he was reassured that she would take him back if he broke off his engagement. He ended things, went to Virginia Beach to see Lauren, and she basically leapt into his arms. They've been together ever since and, naturally, at the end of their segment on After the Final Rose, after all the breakup processing with Becca was over, Arie popped the question. Lauren gleefully accepted and Arie entered into his second engagement in four months.

Twitter noticed that the rings definitely look pretty similar, but it doesn't seem like Arie proposed with the exact same ring he gave Becca. (Let's be real, a move that cruel is endless harassment from fans waiting to happen and ABC probably doesn't want to be held liable for that either.) In the end, Becca became the new Bachelorette, and I guess everything worked out the way it was supposed to. Here's to an even more beautiful ring for her next season.