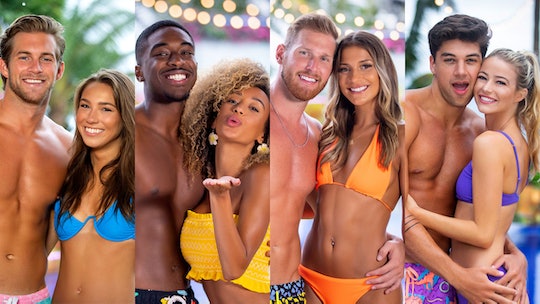 If you've been watching Love Island on CBS you know that technically no one is single anymore. The final elimination is over and all of the finalists are claiming to be in their respective relationships for love. Cute, right? But don't forget there is money on the line and everyone has known about it since Day 1. So, how much do Love Island USA's winners get? It's not chump change, and all of the couples entered the villa as single people with dreams.

The winning couple on Love Island gets to split $100,000. I know because my favorite man on the island, narrator, Matthew Hoffman, has told me so at the end of episodes. Fans get to choose the winner of the show, so that's where the genuine connection comes in. No one is going to win the collective heart of America by faking their feelings around the other couples or in the confessional. Greed is easy to spot and not necessarily a popular quality. So hopefully no one leaves Love Island USA with $50,000 and a broken heart.

But Love Island, which has been a hit in the UK for five seasons now, includes a simple twist that makes it more like The Hunger Games and less like The Bachelor with money at the end: the contestants get to choose whether they want to split the cash prize (£50,000, equal to $62,000, in the UK) with the near-stranger they're now in love with or keep the money for themselves. The final choice totally adds pressure to an already intense situation.

Receiving about $30,000 for finding true love sounds good to me. But so does $62,000 for the single life. I don't know which I would choose, to be honest. Especially if I had millions of people watching me make my decision (and would probably judge me for it).

Backstabbing is sometimes a part of reality shows, but the intensity of Love Island's popularity in the UK often leads to "very strong" public opinions that can have serious psychological effects on the contestants, The New York Times reported.

All four couples on Love Island U.S. are thinking about love instead of money. Perhaps because they don't control who wins the show or how much money they receive. Three out of four couples have officially announced they are in committed relationships and Zac and Elizabeth, who have been coupled up since Day 1 in Fiji, have professed love after just four short weeks together. Only the newest couple to pair up —Weston and Emily — have yet to label their relationship.

So, all of the Love Island USA finalists are winners if you ask me. The show might be the beginning of the rest of their lives because Love Island UK has already led to some marriages and babies. Only time will tell if America's couples last but I'll definitely be tuning into the finale to see who wins the money.

Editor's note: an earlier version of this article incorrectly described the final twist on Love Island USA. It has been corrected.