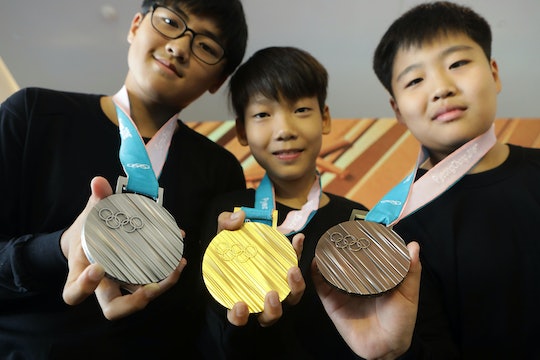 Here's How Much A 2018 Olympic Silver Medal Is *Actually* Worth

The world will soon watch Olympic athletes proudly collect medals at the 2018 Winter Games in PyeongChang, South Korea. And while the glory, and the chance to represent your country, is often the most talked about of accolades, it's not atypical to wonder just how much those medals cost. So, how much is the 2018 Olympic Silver Medal worth? And, perhaps more importantly, is it worth more than its weight in, say, gold?

The answer, it seems, is either not much or quite a bit depending on how you look at it. Acccording to Olympic.org, the silver medals for the 2018 Games in PyeongChang weigh 580 grams and are actually made of silver (or at least 99.9 percent silver). If you were to melt it down and sell the metal, Sports Illustrated reports that you'd only make about $320.00 for a silver medal. However, if you sold the medal online or in an auction as sports memorabilia, you might make between $15,000 to $30,000 for a silver medal. Of course, a medal might be worth more or less, depending on who won it and when and in what miraculous fashion. And that's not even counting the sentimental value of these symbols for the athletes who earned them, which might be pretty close to priceless.

As previously stated, and according to Olympic.org, the silver medals for the 2018 Games in PyeongChang weigh 580 grams and are made out of 99.9 percent silver. A silver medal made out of silver doesn't sound all that surprising, but the gold medals are actually made of silver, too. The difference between the two? Gold medals are covered with 6 grams of gold, efficiently differentiating first place from second place in the process. Bronze medals, for the record, are actually made of copper.

Olympic medals are worth more than the value of the metal used to make them, though. Each medal is also a work of art. According to Olympic.org, the 2018 medals were designed by South Korean artist Lee Suk-woo, to look like the texture of trees, and include the Korean alphabet, Hangeul, on the medal itself and embroidered on the ribbons that will hang around winning athletes' necks.

According to Sports Illustrated, a silver medal at the 2018 Winter Games will earn U.S. athletes a cash prize of around $15,000, but their actual Olympic medal is not worth nearly that much if you only consider the metal it's made of. So if you were to melt a silver metal down for the silver alone, a second-place medal would only be worth about $320.00. U.S. Olympic medalists will have to pay taxes on both their cash prizes and the actual value of their medals, too, and according to CNN Money.

For the athletes who place at the PyeongChang, the medals represent athletic accomplishments that few people can claim. That doesn't stop some athletes from selling or giving away their medals after the games are over, though. Contrary to popular belief, CNN reports that the U.S. government doesn't pay it's Olympians a salary, and they only win prize money if they medal. And while $15,000 might sound like a lot of money for a silver medal win, when you consider the years of work it takes to get to the Olympics, well, not so much.

So, it's no wonder that athletes might try to sell their medals at auction to get by, making an average of $15,000 to $30,000 more for a silver medal, depending on who the athlete is, according to Sports Illustrated. So, for example, Nancy Kerrigan's 1994 silver medal for figure skating earned just weeks after she was attacked (allegedly orchestrated by her rival Tonya Harding), would be worth way more than an unknown athlete in a less popular sport.

As Olympic memorabilia expert Ingrid O'Neil told USA Today, medals won at the Winter Games are generally worth more than those won at the Summer Olympics, because fewer medals are awarded during the former. USA Today also reports that while older medals are rarer, and you might think they are worth more, because medals older than 1960 aren't marked with the event or sport like they are today, there's often no way to know when, where, and by whom a medal was won, and, consequently, how much they are worth.

More Like This
A First Look At The New Hess Collectible That's Probably Definitely Going To Sell Out
Score Big On Super Bowl Sunday With The Best Frozen Apps From Trader Joe's
41 Costco Appetizers To Level Up Your Super Bowl Party
When Do We Spring Forward In 2023? Mark Your Calendars
What Parents Are Talking About — Delivered Straight To Your Inbox