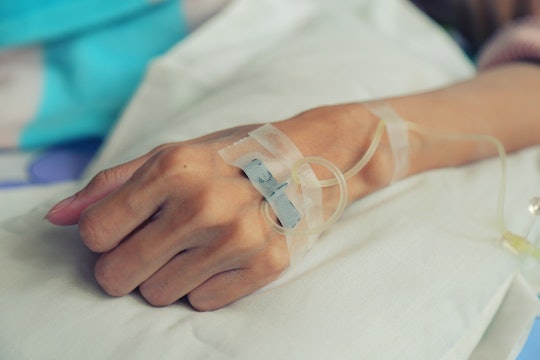 Last month, the U.S. Food and Drug Administration approved a drug treatment specifically for women suffering from postpartum depression for the first time ever, under the brand name Zulresso, USA Today reported. News of such treatment sounds encouraging, but it comes with limitations, such as its price tag. And how much Zulresso will cost may make the FDA-approved drug treatment out of reach for many women and only available to a select, privileged group.

More Like This
Therapist Says: Alone Time For Moms Is A Necessity, Not An Indulgence
Your Guide To Swimming Postpartum
Postpartum Sex Pain: Why It Hurts & What You Can Do
Could Increased Anxiety Mean You'll Go Into Labor Soon? Experts Explain

As postpartum depression impacts up to one in seven women in the United States, according to the American Psychological Association, Zulresso — the brand name for the drug brexanolone — certainly seems to be an important breakthrough. And, as NPR reported, the FDA-approved drug can work much more quickly than traditional treatments, which can take weeks to kick in, and clinical trials showed that Zulresso can take effect within 48 hours after treatment is started.

But that treatment is neither easy nor, for most people, currently affordable. With a price tag of $34,000 per treatment, according to The New York Times, this new treatment will likely be out of reach for most women. Additionally, as The New York Times reported, women from lower socio-economic groups are more likely to experience postpartum depression, and for them Zulresso would be even less of an option.

"Those who have the highest rates of postpartum depression and who would benefit the most, I fear it will be limited access to them," Dr. Maria Musik, an associate professor at the department of psychiatry and obstetrics and gynecology at the University of Michigan, told NPR. It’s still too early to know how or if insurance companies will cover the cost of treatment, according to the Massachusetts General Hospital Center for Women's Mental Health

Beyond the drug treatment's price tag, how Zulresso can be administered also comes with limitations. According to the FDA, Zulresso will only be available for patients though "a restricted program called the Zulresso REMS Program" by a health care provider in a certified health care facility. This is because the treatment requires a continuous 60-hour (equivalent to 2.5 days) IV infusion, and it can cause sudden loss of consciousness or low blood-oxygen levels, the FDA notes. As such, patients need to be monitored closely while undergoing the treatment.

Psychiatrist Monica Starkman M.D. tells Romper that Zulresso will be a new option among the various treatment methods for women with postpartum depression, such as psychotherapy and antidepressants, according to the Mayo Clinic. Each woman's experience with postpartum depression varies, of course, and Starkman tells Romper that Zulresso "is for women with severe depression."

"It is also when the presentation is severe enough that waiting a few weeks for an antidepressant to work is too long," Starkman explains. "That means the woman might be suicidal, and their interactions with their baby may not be optimal. Those would be some of the factors leading to consideration of this medication with its rapid onset of action."

Right now, it’s too early to know exactly how long treatment with Zulresso lasts. Initial studies "observed" improvement in depression in participants at the end of the "first infusion" with the treatment and again at "the end of the 30-day follow-up period," according to the FDA.

Dr. Kecia Gaither, director of perinatal services at NYC Health + Hospitals/Lincoln, tells Romper that "while these drugs appear to be novel remedies, more research needs to be done with them concerning if there will be any significant long term neurological effects, and what effect if any will occur with subsequent pregnancies."

Gaither continued, "Will depressive symptoms resume, will they be as intense, or will the drug, prophylactically, need to be given immediately post delivery, [are examples of] of some pertinent questions to be answered."

Though there are undeniably many unanswered questions still surrounding the new FDA-approved drug treatment, Starkman says that one of the side effects of this news brings attention and awareness to important health topics, including infertility, miscarriage, and postpartum depression. "All of which have been too long suppressed and causes of personal shame and social stigma," she tells Romper.

As Starkman noted, hopefully news of Zulresso is sparking much-needed conversations about the importance of taking care of mothers. And with such conversations, hopefully medical professionals will be able to find ways to do just that and make treatment for postpartum depression accessible for all.