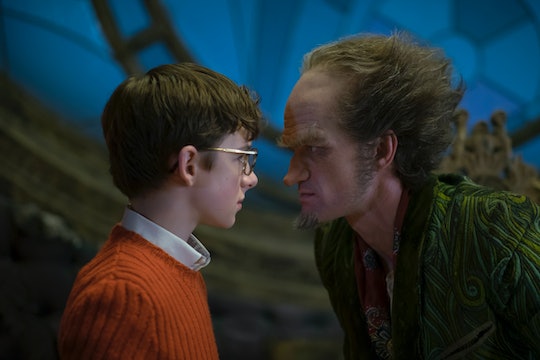 'ASOUE' Season 1 Only Covers Some Of The Books

Fans have been anxiously waiting for Netflix's highly anticipated new show, A Series of Unfortunate Events, to make its grand debut. But even now that it's almost Jan. 13, it's hard not to already be clamoring for more. The first season consists of eight episodes, which probably wouldn't be enough time to adequately handle all of the many "unfortunate events" that take place throughout the 13-book series. The show's official trailer clearly features moments from beyond just the first book, so clearly we're not getting one book per season either. But how much of the books will A Series of Unfortunate Events cover in Season 1?

The question of just what portion of the series the new TV adaptation would cover has been on fans' minds ever since the show was first announced as in development back in 2014. Much of the concern over whether viewers would finally get a full adaptation of the entire 13-part story likely stemmed from the fate of the first, aborted attempt at adapting the beloved series. The 2004 original movie adaptation used the first three books — The Bad Beginning, The Reptile Room, and The Wide Window — as its source material. That film, starring Jim Carrey in the iconic role of the villainous Count Olaf, was meant to be the first of what the studio execs hoped would turn into a film franchise. Unfortunately, that never came to pass, and fans were left without any adaptation of the remaining ten books.

According to the series' brand-new Count Olaf, Neil Patrick Harris, the first season of the Netflix show will cover similar ground to the 2004 movie. Appearing on a September episode of Live! With Kelly, the actor discussed the specifics of how the episode-by-episode breakdown would work and exactly what the first season would cover.

"[Netflix’s take on the books] is more spread out [than the 2004 movie's]. Each book is going to be two episodes. We did the first four books, the first eight episodes of the show," the former How I Met Your Mother actor explained. Harris also noted that the new adaptation would be "super dark," and that, compared with the earlier film, it would be "a much darker on the take on the material than has been seen before."

This means that Season 1 will cover The Bad Beginning, The Reptile Room, The Wide Window, and The Miserable Mill, which tracks with the various Count Olaf disguises we see in the trailer and when each of them is introduced in the books. Assuming the show is a success in the streaming service's eyes and assuming that the creators decide to stick with their current book-to-episode ratio, fans of the darkly comic YA series can reasonably expect at least 26 episodes total to tell the entire 13 book series.

I, for one, can't wait to see the new, "darker" take that Netflix is going with for the series. So get ready for the binge-watching to commence!