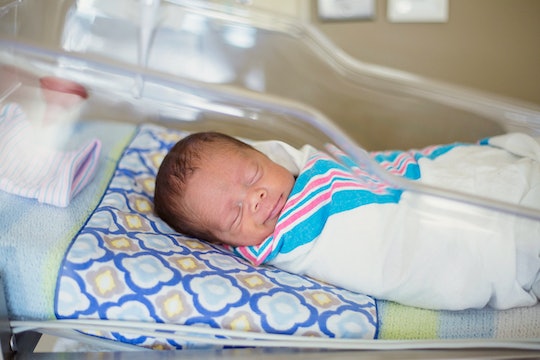 If you give birth to a preemie baby, you can forget most of what you learned in all those books and blogs about infanthood you read while pregnant. Caring for a premature baby is not the same as caring for a full-term infant, and one of the major differences is how much sleep premature babies need. If you’ve been wondering this yourself, well then, the very abridged answer is that preemies need to sleep a lot — almost all day actually.

A preemie is defined as a baby who is born between 20 and 37 weeks, according to What To Expect. Having a pre-term baby is undoubtedly challenging and emotional, and it can be especially daunting because parents who assumed they were prepared for infanthood need to learn a new set of guidelines after leaving the NICU.

Timothy Yao, M.D., Neonatologist at Doctors Medical Center in Modesto, California, told Romper that “[preemies sleep] up to 22 hours a day, depending on how premature the babies are.” This is in contrast to the 16-17 hours of sleep full-term newborns need, per Stanford Children's Health guidelines. “Premature babies in essence have very different sleep and awake cycles due to their immature respiratory and central nervous system development, as well as their frequent feeding schedule of every two to four hours. Some babies may experience [a] deep sleep state for one hour interspersed with [a] drowsy state,” Yao adds.

“Early in development, infants born preterm engage in longer, lighter and more active sleep than infants born at term," according to a 2013 study published in The Infant Mental Health Journal.

You may be eager for your baby to start sleeping through the night, but it will take premature babies significantly longer to do so because they need to eat so frequently. Per The American Academy of Pediatrics, “Don’t expect your preterm baby to sleep through the night for many months. Unlike a term baby, who might sleep a full six to eight hours at night by 4 months of age, your baby may not accomplish this task until 6 to 8 months or later.”

When thinking of your preemie's age (in terms of milestones like sleeping through the night) it’s important to calculate their “corrected age.” It’s actually pretty simple to calculate, even for a math-averse person like myself. You subtract the week number at which they were born (30 weeks, for example) from 40 weeks, which is considered a full-term pregnancy. So if your baby was born at 30 weeks, you can expect their milestones to happen at least two and a half months (ten weeks) later.

Know that while it may feel excessive, the sleep they're getting is vital to a preemie's growth. Yao says, “Premature growth velocity is determined by a multitude of factors including infant’s degree of prematurity, underlying environmental factors (maternal health, genetic disorders, etc.), postnatal medical & health issues, availability and tolerance of appropriate nutrition. While the infant is experiencing quality sleep, it will translate into less energy expenditure and less overstimulation which should translate into better growth especially in baby’s neuro developmental potential.”

New parents are often advised to get their baby on a sleep schedule as soon as possible. This can seem tough with preemies (who seem to sleep and eat at random), but it’s not impossible. In fact, sticking to a consistent schedule whenever possible may help ease the overstimulation common in premature babies and help with their brain’s development. It also may help you, as a parent, feel a bit more relaxed.

“Allowing a baby to transition properly to a home environment with a consistent sleep pattern will enhance baby’s healthy brain development as well as decreasing parental stress and anxiety at home.” Yao tells Romper. He recommends implementing the following strategies to get a preemie on a schedule:

Rest assured that within a year or two, your baby (and you!) will sleep soundly through the night. You got this.