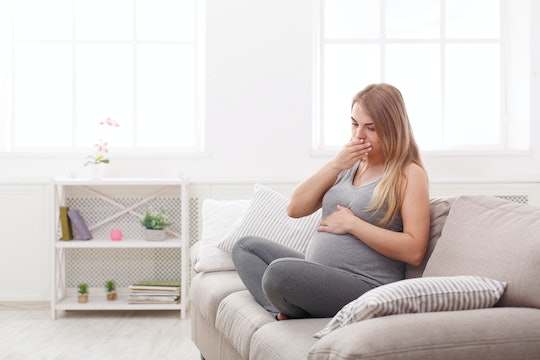 Vomiting During Pregnancy Is Common, But Here's When Your Daily Puke Is Too Much

I really used to love falafel. Then I became a nauseous pregnant person, and now, I can't stand the smell of delicious fried chickpeas anymore. (If you knew me, you'd understand that the loss of this Middle Eastern staple is a true tragedy.) Unfortunately, vomiting and pregnancy just go together like the peanut butter and jelly you're struggling to keep down, and most women struggle with nausea at some point in their first trimester. But how much vomiting is too much during pregnancy, and when should you worry? The good news is that there's no need to measure quantities of vomit. But you should pay close attention to how you feel.

In general, puking is normal, and usually not dangerous. In fact, according to American Pregnancy Association, 85 percent of pregnant women experience nausea and vomiting. For an unlucky few, however, constant illness is the hallmark symptom of hyperemesis gravidarum, a condition that can land you in the hospital. And when mothers can't keep anything down — including water — doctors worry about the risk of dehydration. "When a woman vomits repeatedly, she’ll lose water and salt, and if she’s not taking anything in, she goes into a starvation state and her body starts to make ketones," explains Dr. Bradley Price, an OB-GYN in Austin, Texas, in an interview with Romper. He explains that he tries to do several things to keep her from getting to that point.

For one thing, Price encourages pregnant moms-to-be to consult their doctors if they're experiencing daily sickness. "Don't suffer in silence," he says. If you're really sick, it's not the quantity of vomit that matters, but rather your ability to keep basic foods, and especially water, down. To prevent dehydration and starvation, Price tells moms "to relax, rest off their feet, and worse comes to worst, get some electrolyte drinks, like Gatorade." The next thing he'll consider are over-the-counter medications, like ginger, which has been proven helpful. Vitamin B6 taken in combination with the sleep-aid Unisom might also relieve your morning sickness, he says. In severe cases, your doctor might even prescribe medication.

If you're trying to stem the tide of constant illness, you can also take a look at your prenatal vitamin, says Price, because prenatal vitamins that include iron sulfate might actually be making you more nauseous. If possible, ask your doctor for a prescription prenatal vitamin instead of the generic kind.

Interestingly, no one knows exactly what causes morning sickness — though there are theories. Discover Magazine considered the paradox: your body is desperately in need of food, but you can't keep it down. What gives? One recent evolutionary theory is that your body is trying to protect you from consuming potentially contaminated meats, fish, and eggs (common problem foods, according to researchers — no mention of my issues with falafel) during the critical first trimester. From your body's perspective, it might be better for you to vomit your dinner up than risk contracting a harmful infection. And it's no use arguing with prehistoric logic. When possible, opt for easy-to-digest foods, and eat small, frequent meals rather than one large one, WebMD advised.

When it comes to how much vomit and puke is too much, the important thing to remember is that if you're able to eat and drink at least a little each day, you and your baby are likely going to be fine. The trouble starts when you're really suffering, as in starving and utterly unable to swallow water and keep it down. When your symptoms are way worse than the average case of the flu, it's time to give your doctor a call.