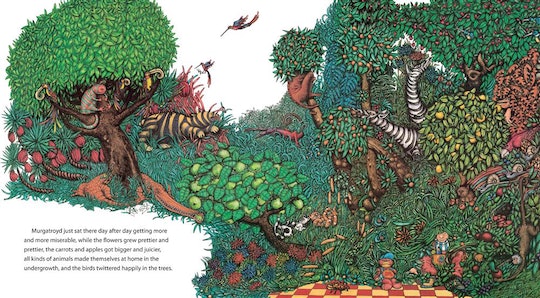 If only I’d known at age 5 that I could blame my bath tantrums on science, I may have spared my parents hours of washing and hair-brushing hell. Turns out that thanks to the recessive MC1R gene — caused by the pairing of three possible mutant alleles (also the name of my future punk band) — I, and apparently all redheads, have a lower tolerance for pain. I swear, it’s true. Studies have found that redheads require 19 percent more general anesthesia, are more sensitive to hot and cold, and generally perceive pain differently than those with other hair colors. “So there!” 5-year-old me shouts.

Of course, I didn’t know this at age 5 and wouldn’t have the slightest concept of genes (still kinda don’t) until years later. Instead, my ignorance and wildly chaotic mop made bath time less of an everyday hygiene routine and more like a nightly hostage negotiation situation.

Oh sure, it would start happy enough. I’d splash and sing, making up songs about Strawberry Shortcake and Jem and the Holograms. Then it would happen. Dad would break out the No More Tears baby shampoo and like a carrot top Kraken I’d unleash the bath monster within me. I’d scream, I’d shout, I’d plead not to have them finger through my knotted ginger locks.

And that was just the beginning.

After using a kitchen saucepan to rinse out the Whoa, More Tears! shampoo, my parents had the unenviable task of actually combing my hair. This fresh hell got so bad that my father, out of sheer desperation, took on an entirely different bath-time persona: Mr. Kurt, hair stylist extraordinaire. Wielding a pink Goodies comb, he’d put on a French accent in an attempt to at least get a laugh out of me:

“Ok, my petite fillé, now I will comb de hair and make it trés, trés pretty.”

I’d giggle then scream as the comb’s tines hit shaggy rats nest after shaggy rats nest, yanking my scalp in ever more excruciating tugs. It appeared that no amount of joie de vivre was going to make getting my hair washed and brushed any better.

Murgatroyd’s rants interrupt one of the Mayor’s important speeches. He startles the Queen so much she drops and shatters her crown. The President (yes, there’s a president and queen, we’re talking kids’ fiction here, folks) thinks Murgatroyd’s protestations are the sound of his plane taking off, runs to the jet and loses all of his important papers when his luggage pops open in his race to get on board.

Irritated, the Mayor, Queen, and President get together and decree that Murgatroyd’s parents must cease washing his hair.

So they do. And guess what happens?

On top of Murgatroyd’s dirty little head, he begins to grow a garden. Not just a few blades of grass. Oh no. We’re talking a massive, tropical rainforest. In fact, Murgatroyd’s filthy scalp is such an ideal ecosystem it invites numerous creatures to move in. Birds build nests, delicious apples and carrots grow, all kinds of animals make themselves at home. Murgatroyd becomes a human greenhouse.

Now picture if you will a wide-eyed, amber-haired moppet (ahem, me) sitting on her father’s lap, hearing this jaw-dropping tale. Even at the tender age of 5, I understood: I wasn’t just looking at a wildly illustrated book. I was staring into my future. I was Murgatroyd. And I was scared.

Perhaps it's because of his Czech upbringing or his background in newspapers and magazines, but the book’s illustrator, Drahos Zak, had a knack for subtle creepiness. Murgatroyd’s parents, with their shifty eyes, look downright spooky. The forest creatures who take up residence in Murgatroyd’s mop are mildly disturbing, and the sheer enormity of the baby poop green garden atop the boy’s head suggests a crushing weight from which Murgatroyd may never escape.

I hesitate to label this book "children’s horror," but I’d argue categorizing it as “toddler suspense” isn’t too much of a reach.

And tiny tot me was rightfully frightened. The prospect of becoming a walking vegetable patch seemed all too real. We talk a lot about reading to children to help them overcome fear, but I’d argue that using storytelling to instill some healthy (even if imagined) fear is just as important.

Reading Murgatroyd’s Garden worked. With the words “you don’t want to become like Murgatroyd” rolling through my head, I relaxed my completely unnecessary and out-of-control bath tantrums. I didn’t bandy my head about each time my parents approached with the comb — which, incidentally, made the entire experience all the less painful. I still demanded my Dad put on the French accent, but I didn’t follow it up with hysterics.

Sure washing and combing still hurt, but it didn’t hurt that bad. And I needed to learn sooner or later that if I was going to make it in this world, I’d need to buck up. Between real pains and growing pains, it’s hard out there for a ginge.