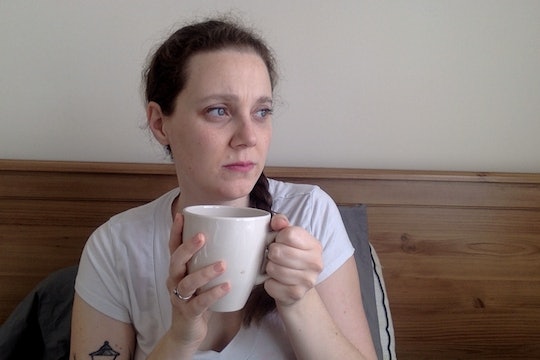 How My Friends & Family Helped Me Through My Miscarriage

My first pregnancy ended in a miscarriage. My partner and I were actively trying to conceive, and were thrilled when we were successful the first month. But less than a week after that first positive pregnancy test, I started spotting and then bleeding. My miscarriage was confirmed by the labs my midwives ran. It was devastating, and I found myself wanting to talk about it, even to people who hadn't known I was pregnant. I was the first of my friends to try to conceive, so I know a lot of them had no idea what to do to help me through such a difficult time. But there were a few simple things my loved ones did that made me feel supported. My friends helped me through my miscarriage, and I am forever grateful for the concern, care, and support they gave me.

Unfortunately, there's still a stigma surrounding miscarriage, and there were times after I lost my baby that I wasn't sure it was OK to really talk about it. Even though though, intellectually, I knew I shouldn't be ashamed, it was embarrassing to reveal something so intimate. There were moments where I'd worried I somehow "failed," and that I should be embarrassed by my body's shortcomings. Still, for me, talking about it with my friends and family helped me shed some of that shame and chip away at the stigma. Some of the ways my friends and family came through might have seemed small to them at the time, but the feelings of support and solidarity and empathy I received have never faded. They'd actually be surprised to read this, knowing that that little thing they did made all the difference.

This one may seem obvious; but I needed space and comfort to process the emotions. I do a lot better processing when I can do it out loud. I cried on the phone. I cried with friends. I cried when I talked to my mom. I didn't really want reassurance that everything would be OK. What I did need, was to know it was OK to feel what I was feeling and that my friends had my back.

When my friends called me to check in, even though the conversation didn't start with, "how are you feeling about your miscarriage?" they'd give me an in to talk about it. Just asking "how are you today?" was marvelous. I could tell them how I truly was, and then that awarded me an opportunity to talk about how felt. Sometimes I'd just say "fine," and we'd leave it at that. But other times I was detailing the labs I needed to get done and how glad I was that I completed the miscarriage on my own and wouldn't need any medical procedures. Even though I put on a brave face, they didn't acknowledge when my smile wobbled or my voice wavered. They gave me room to work through the emotions, and they listened at every turn. Even if it was hard for them, and even when they didn't know what to say, they respected me enough to hear me.

They Took Care Of Things I Didn't Want To

I wasn't going to mention my pregnancy and miscarriage to one of my friends in particular because we hadn't been especially close since college. He lived over an hour away from me at that point, and to be honest, I already felt like I had plenty of support. But when he asked me if I was interested in acting in a play he was producing. I did the math, and if I was able to conceive again before then, I'd likely be too largely pregnant to play a non-pregnant person. I told him I wasn't sure "because of ... reasons," and then the whole story came spilling out. Not only did he listen, he and his partner immediately said they would bring us dinner.

I was floored by his generosity. It was great to know that even though we didn't talk often, he still had my back. Even though I had as many male friends as I had female ones, I naturally relied more heavily on the women of the bunch. It was so refreshing to have a male friend be so unembarrassed about the whole thing. And he's a super feminist, so I know he'd happily say "f*ck shame." That helped me feel brave.

Not only is it helpful to have one less thing to worry about when worrying is all you're doing, but the gesture of bringing someone dinner is pretty huge. I didn't realize how much that question — "what to make for dinner?" — factors into your every day. When I was dealing with so many other, bigger emotions, it was helpful to have one less mundane thing to worry about. And bringing dinner is what you'd do for someone who's just had a baby. It's what you'd do for someone who is grieving a death. In a way, my body and mind were going through both of those things.

They Sent Me Cards

I never would have thought of doing this if I hadn't received a card from my grandmother. She'd never had a miscarriage, and neither had my mom. And, I'm sure, in the '50s and '60s, when she and her friends were having kids, it was a much less discussed experience. Still, she knew that I was grieving.

Her sympathy card was so sweet. It was simple, just a note to say she was thinking of me and was sorry for my loss. It was nice to know I had her thoughts, but it was even better that I had an acknowledgement of the baby's existence. I really craved that in the early days, because it all felt so surreal. I was missing something that had just barely had a chance to exist. I kept the positive pregnancy tests in a drawer. It was such a whirlwind: finding out I was pregnant and then losing that pregnancy in the span of a week. It sort of felt unreal. I needed it to be real so that my huge emotions felt justified. I had suffered a loss. And when someone suffers a loss, you send them a card.

They Distracted Me When I Needed That

Talking about my miscarriage helped me. But so did talking about other things. While giving me space to grieve, my friends were also ready to hang out and get coffee and watch movies. It helped me to know there was still a lot more going on in my life than trying to conceive. It had been consuming because I had gone all out: taking my basal body temperature, taking early pregnancy tests, and then wondering if the pregnancy was viable. It was nice to have a break.

I used to love dark or emotional movies, but suddenly all I wanted to watch were things that wouldn't tax me emotionally. And my friends were more than happy to watch Zoolander and Mean Girls for the millionth time.

They Held My Hand Through My Subsequent Pregnancy

My now-5-year-old son was conceived a month and half after my miscarriage. The early days of that pregnancy were nerve-wracking, to say the least. I over-analyzed every symptom and twinge. I couldn't wait for the moment when a heartbeat could be detected. I fretted. A lot.

I needed distractions and to pass the time until the first trimester was over. Since I had shared my news of the miscarriage with a lot of people, I didn't keep the fact that I was pregnant again a secret. I needed the support of my friends and family in those early weeks of pregnancy just as much as I needed them before. I realize not everyone who goes through a miscarriage will find all the same things helpful that I did. But there's no harm in asking what someone needs. You can never go wrong by listening, and I am so thankful they were there to listen and to support me, however I needed.