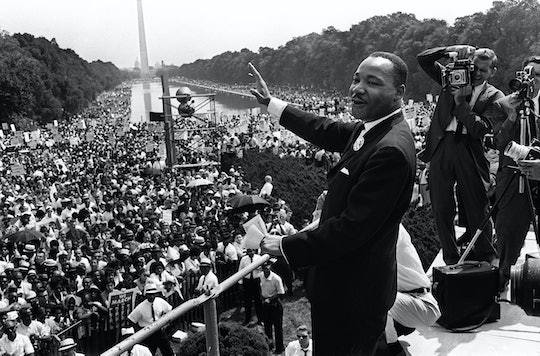 With all turmoil that’s taken place all over America in the last three years for black men and women, this year I'm celebrating Martin Luther King Day with my kids with a day of service. As black people, our civil rights and wellbeing are threatened daily, not only on a personal level but on a nationwide one as well. Before kids, I only ever celebrated the holiday by wondering if I was off from work or not, but after kids, my intentions changed. My kids are growing up in a world that challenges their blackness daily and I want them to see themselves as equals in their communities, their classrooms, their friend circles, in their country. I want to them to know not only the value of their lives, but also the beauty of them as well.

As a black mother, my dream for my children is as simplistic and as honest as Dr. King's:

I have a dream that my four little children will one day live in a nation where they will be judged not by the color of their skin, but by the content of their character.

Though I'd be lying if I said I wasn't disappointed that in the 48 years since his death, this is still a dream for mothers of color.

The importance of this day and Dr. King's words not only matter to me, but to my kids. A few months ago my daughter learned about Martin Luther King in her classroom at school. After learning about his life and his work, she kept asking me, "Could we clean up trash on the side of the street? Could we volunteer at an animal shelter? Could we go visit older people in a retirement home?" She was struck by an urge I know all too well: the desire to do something, to make a change, to be visible and proud in a world that's constantly asking to reshape and redefine define our experiences without ever asking us permission.

Even though I'd never actively celebrated MLK Day before, at my daughter's urging, we made plans to help. Her need to give whatever we could was a wake-up call for me. Though it's so easy to feel like we don't have much (especially right now), we do still have something to give — and that's, most often, enough. Even in their saddest moments, I want my children to know that they are still capable of giving their time and energy. That their time and energy are still things of value. I want them to know that whatever it is they can share with others will touch and benefit someone in some way. I want them to always believe in their power and their strength.

Raising biracial children has its own challenges, especially because so many people in their lives view them as black or white, not a mix of both. In light of that, I constantly teach them to give, even when it means giving to those who've wronged or supported the wronging done of their black community. It's not that I don't believe in righteous anger, because I do, but I want my children to know that you can be aware of the social injustice that exist and also give and serve to reduce them.

I believe change comes about in different ways: from the protests and also the peaceful moments where volunteering, or perhaps even sharing something as simple as baked cookies with neighbors takes place. Kindness is powerful, even if some see it as "weak."

My daughter has been reminding me why it's important to continue to give. She's the one who, even in my continued grief over black boys and men dying, has told me we can't just stay angry, that we have to keep loving. Sometimes I chalk it up to her being so young that she's naive to the realities, but ultimately I know she's right. I watch her joy with grow when she's able to help around the house, with her friends, or with her neighbors. I want to encourage her kindness and help her continue to grow in that. I want her to cling to her ability to give. Because there will come a point where it's the only hope she'll have, and I want it to be strong.

Today, in honor of the fight and of Martin Luther King, my daughter and my son are spending the day with their dad, helping however they can. They've planned to visit a retirement home. They plan to be seen and heard. They plan to give. They are both so proud to know who MLK is and are really excited to honor his memory. Their hope is the light against the darkness, and today it shines so bright.