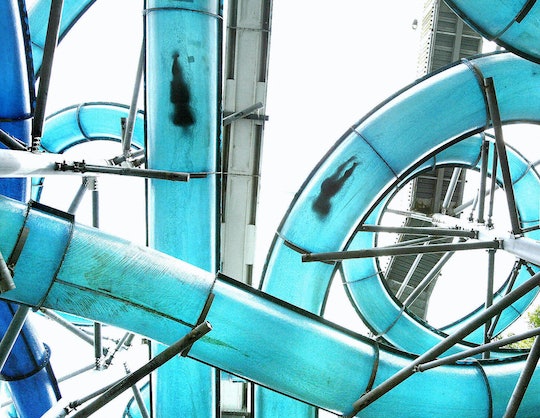 The tragic decaptiation of 10-year-old Caleb Schwab at the Schlitterbahn water park has called into question the safety of Verrückt, the world's tallest water slide. The Kansas City Star has reported that the state hasn't inspected Verrückt since it opened two years ago, but that's completely by the book; Kansas' 2009 Amusement Ride Act only requires rides to be inspected annually by a certified private inspector. The inspection report is then kept on file by the park, and the state can audit the records if it so chooses.

In fact, there is no federal oversight with regards to amusement parks; that's left up to the states. And while some states have very strict laws regulating the safety of roller coasters, water slides, and other permanent rides, others – six states in all – have none whatsoever. The International Association of Amusement Parks and Attractions argues that there's no need for the federal government to get involved, since the states are all doing such a bang-up job, but even among states that do regulate parks, many have extremely lax rules, and quite a few leave it up to the parks to police themselves (the nonprofit organization Saferparks has a state-by-state guide to amusement park safety regulations, and it's a scarier read than some Stephen King books).

When it's up to the people who depend on rides being open in order to earn a paycheck, it's no wonder amusement park visitors are being decapitated, drowned by alligators, and thrown from roller coasters. There is literally nothing stopping anyone from opening a real-life Jurassic Park in Wyoming tomorrow. As long as the GMO dinosaurs aren't traveling from town to town like a ferris wheel, nobody from the government is going to get involved.

The trouble is that it's hard to prove that federal oversight is needed without statistics, which nobody can accurately collect. Since the government doesn't regulate amusement parks, they also can't track injuries and deaths that occur there, so there are no national statistics available. The Consumer Product Safety Commission does collect data reported from hospitals and extrapolate from there to come to an estimate, but that's all we have. That, and the recent headlines about four amusement park accidents in five days. Massachusetts Sen. Ed Markey has been fighting for over a decade for national amusement park safety standards, but has continually been defeated by lobbyists from the IAAPA. Perhaps the events of this summer are the push he needs to finally get his legislation passed.