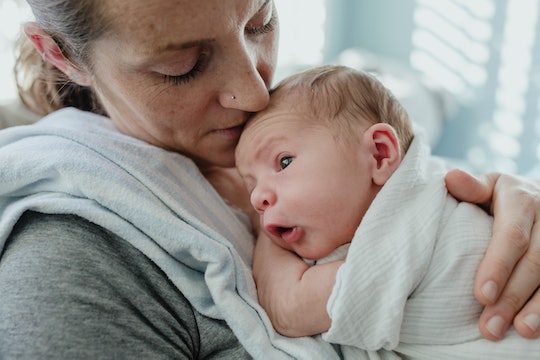 How Often Do Babies Go Through Growth Spurts? Experts Explain

As every new parent quickly learns, the only true constant is change. Think you have a good feeding/sleep routine down? Well, don't get too comfy, because it's likely to go out the window any second. And one of the great disrupters of a baby's routine is a growth spurt. Which is why it can be good to have a sense of how often babies have growth spurts, and when parents might expect them.

Dr. Jennifer Trachtenberg is a pediatrician and spokesdoctor for the American Academy of Pediatrics, and she says babies grow exponentially in that first year. "They double their birth weight by 5 months, and triple it by a year. So they are always growing."

But she says that yes, there are periods of increased growth, particularly in first few weeks, followed by the 6-week marker, the 3-month marker, 6-month marker, and the 9-month marker. During these periods, she says, "Baby can seem more hungry, and want to eat more often, even cluster feeding. Babies may want to feed for longer, or seem to want more per feeding." Perhaps no surprise that the biggest tip off that baby is doing some serious growing is their ravenous appetite.

Pediatric sleep expert Natalie Nevares says that when children are very little, they will be much fussier and hungrier than usual during a spurt. "They might seem unsettled and hungry after two to three hours, even if they're used to a three to four-hour feed schedule. Or they'll seem fussy after a feed, and will take a few more ounces if you offer it."

Other signs of a spurt? Baby pulling some new developmental tricks out of the bag. "The most obvious growth spurts to look out for are at 3, 6, 9, and 12 months because they coincide with big developmental leaps like rolling, sitting up, crawling, standing up, and furniture cruising," Nevares says. "Sometimes these developmental leaps coincide with increased appetite, or you'll notice your baby trying to do new tricks and seem fussy about it, but then see the developmental changes soon after an appetite increase."

And yes, of course, I'm sorry to say these spurts may throw your sleep schedule out the window.

"They might start to sleep longer night stretches between 6 to 8 weeks, but then between 3 to 4 months sleep begins to deteriorate as your newborn becomes more wakeful," Nevares explains. "The 4-month sleep regression everyone fears is for real, but it's not so much a regression as it is a developmental leap. Your once sleepy newborn will want to break out of the swaddle, find their thumb, and roll."

Ah yes. And you know what that means, parents. When your baby wants to roll, you best be ready to rock and roll at 3 a.m. So have those Sandra Boynton board books at the ready.

While growth spurts can be super exhausting (particularly for a nursing mom) they're also quite exciting — baby is getting so big! And of course, it's maybe a teeny bit sad when you go to put on your favorite stripy onesie and discover it now fits your child like spandex, and he's thrashing to get out of it like a crazed little Houdini. I now look at the minuscule socks my enormous 7-year-old used to wear, and it seems impossible they once slipped over his clodhopping feet.