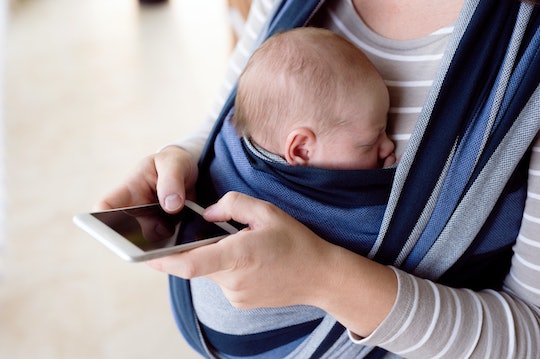 Survey Reveals How Often We're Looking At Our Kids Vs. Our Phones

One of the biggest struggles for parents is balance. Trying to find a positive, healthy way to make time for your kids, time for your work, and time for yourself isn't exactly easy, of course. Especially when technology offers us so many distractions. After all, if you're trying to relax by scrolling through your phone but you're with your kids, that is sort of a good balance right? Well, yes and no. It looks like there is a definite issue with how often parents look at their kids vs. their phones, according to a new survey, and it's something we are all probably going to have to consider moving forward.

The Genius of Play recently released the results of a survey conducted by One Poll regarding how much time parents are spending on their screens in relation to their time engaging with their kids. The reality is that, in 2019, we are far more attached to our phones than at any other time in history. This isn't always a negative thing, obviously. Our phones make it easier to keep in touch with each other and stay connected to what's going on in the world around us. But again, life is about balance. And it seems the balance between screen time and kid time might be off for many of the people involved in this survey. In fact, according to The New York Post, 69% of those surveyed admitted they feel like they are "addicted" to their phones.

It's not as though parents are unaware that this is an issue either. Nearly two-thirds of respondents said they believed they were spending too much time on their phones, and a further 74% reported that they were already concerned about how much time their kids spent looking at screens in a day.

This study is not the first of its kind to infer that smartphones are leading to distracted parenting. A 2017 study published in Developmental Science found that young children whose parents reported spending more time on their phone suffered from a lack of "socio-emotional functioning" and tended to have fewer parent-child interactions. Another international study in 2015 conducted by AVG Technologies found that children whose parents spent a lot of time on their phones felt they had to compete with technology for attention.

Technology is simply a part of our daily lives at this point. Saying that you're going to turn around and stop using your phone is perhaps unrealistic. But maybe if we as parents give ourselves a limit to screen time like so many of us do with our kids, it might help us manage a better balance.