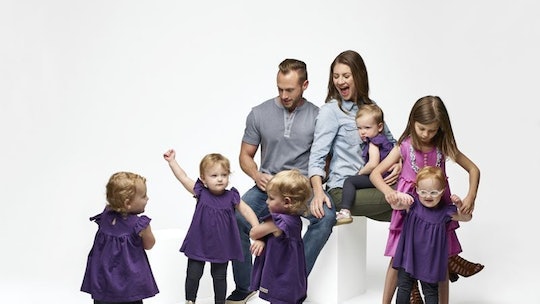 The Busby Quints On 'OutDaughtered' Are Growing Up Fast

TLC’s OutDaughtered is the story of Adam and Danielle Busby, who wanted nothing more than to have another child, but ended up with five baby girls on their hands in addition to their now seven-year-old daughter. Hence, the perfect name of their reality TV show. The series premiered in 2016 with the birth of the Busby’s quintuplets, and now the Busby quints are three years old. Their entire lives have, more or less, been on camera so far. And like so many other reality shows on TLC centered around unique families, they’ll probably be on TV for several more years to come.

In April, the Busby quints celebrated their third birthday and, as Danielle wrote on the family’s blog, it was an event to make them remember when their lives changed as a family. "We have come a long way! Having five little babies born at 28 weeks and two days…to now witness them be three years old…it is just a pure miracle," she wrote. "We are so fortunate to see life be born so early, to successfully make it through three months in the NICU, to now be celebrating a third birthday. I don’t even know how to explain how much of a miracle these last few years have been."

For those who have followed the Busby quints on OutDaughtered since the show premiered three seasons ago, it was an intense birth, as was to be expected. But now, three years later, the quints seem to be like any other toddlers, only you know, there’s five of them. And two parents.

When Danielle gave birth to the quints, it was the first ever case of all female quintuplets being born in the United States. So aside from it being a miracle that all five babies made it and are now healthy toddlers, it’s an amazing birth story in that way too. Season 3 just premiered on TLC and, as Danielle told CountryLiving.com, fans will be able to see how much the quints have grown in the new season. "They are at such a fun age and have become little individual toddlers," she said. "Though this age is fun, it’s hard. Tantrums and potty training... need I say more?" No, she doesn't need to say more, because I can barely handle the thought of potentially maybe potty training another baby sometime down the line, let alone five toddlers at once.

Although fans weren't sure about the possibility of a third season of Outdaughtered, the news came just a couple of months before it premiered on TLC in July and there seems to be a lot in store as the Busby family navigates like with five toddlers and a seven year old.

The new season is sure to be all about the struggles and triumphs of raising toddlers, only in this instance, those difficulties and rewards will be doled out five-fold. I don't think any more kids are in the immediate future for the Busby family, as they seem to have their hands full at the moment, but the trailer for Season 3 did hint at the possibility. In it, Danielle tells Adam, "I haven't had my period yet," after she doubles over in pain. Later, she asks him, "You didn't really get a vasectomy?" Chances are, the pregnancy scare is just that, but it certainly leaves the door open for an episode or two to explore whether or not they even want to have more kids in addition to the six they have now.

Whatever happens, Season 3 is no doubt going to be a whole new adventure for the whole Busby family.