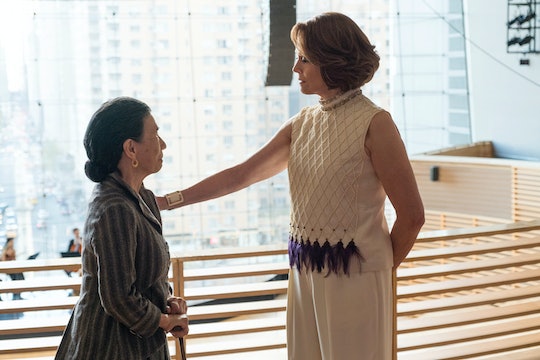 Alexandra Has A Big Secret On 'The Defenders'

Though it's clear the Defenders are up against The Hand, there's still a lot of mystery surrounding the organization's leader, Alexandra. For instance, it seems like she's been in charge for a long time, possibly longer than should be humanly possible. So how old is Alexandra on The Defenders? She could be ancient. (Warning: spoilers ahead for Episode 4 of The Defenders!)

As Iron Fist continues to tell everyone, The Hand is an ancient organization that has been around for centuries, just as long as the Iron Fist. However, unlike the Iron Fist, who becomes a different a different person when the previous one dies, it seems Alexandra (and possibly other members of The Hand), continue on living. Kind of.

When working with Elektra, aka Black Sky, Alexandra revealed that just like Elektra, she had died before. In fact, Alexandra said she's died multiple times, but obviously she's come back. To make matters more suspicious, Alexandra seems to know a lot about history. Sure, she could've just studied a lot, but she seems to talk about past events as if she lived them.

For example, when she visited a Turkish restaurant, she remarked that the food tasted like it came right from Constantinople. The restaurant owner corrected her, telling her there was no more Constantinople, it was now Istanbul.

Similarly, when Alexandra went to listen to the Philharmonics and a woman tried to explain the history behind the music, stating the composer, Brahms, was influenced by Beethoven, Alexandra corrected her. It was not influence that led Brahms to make the song, but rather a direct response to prove he could do it too. She then laughed at how Brahms was "petty like that," as if she knew him personally.

It's clear Alexandra has lived many lives, and, according to Stick, she's been around since The Hand first began, just like the other members of the organization that make the up the five fingers of The Hand. The goal of the group has always been immortality and though they were kicked out of K'un Lun for their nefarious efforts, it's obvious they've been successful in their efforts. Until now.

Based on Alexandra's genuine fear of her illness, it seems whatever was keeping her and the other members of The Hand alive, is no longer working. Alexandra's sense of urgency makes sense if she's become accustomed to living forever, so there's no telling what she'll do to get what she wants.