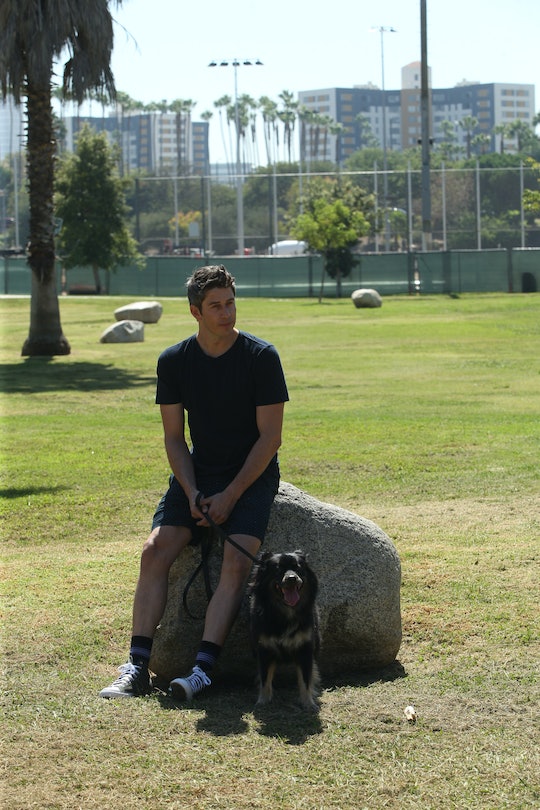 Arie Is Bringing A Special Guest To 'The Bachelor'

One of my favorite moments during Rachel Lindsay's Bachelorette season was seeing her dog, Copper. Now on The Bachelor, Arie's dog will have his own time to shine as well: he'll apparently accompany Arie on a group date. So how old is The Bachelor Arie's dog? If Arie took the lengths to involve his pup on the show, the two must have a very strong bond. I'm not going to lie, Arie's not showing a ton of personality to me during these first two episodes, so I'm excited to see more of his off-camera life and hope the inclusion of his adorable pup breaks him out of his shell a bit.

A little internet snooping proved fruitful: I found a tweet from 2012 on Arie's account where he asked his follower to vote for his dog, Bastian, in a contest for "Dog Days of Summer" from a local Arizona magazine, AZ Foothills. It lists Bastian's age as 4, which would make him around 10-years-old now. I don't know what breed Bastian is, but that's fairly old for a dog. Seeing as Arie tweeted that the year he was on The Bachelorette, he must've had Bastian as a part of his family for a long time. If not the entire 10 years, then at least most of Bastian's life, which means they're pretty close.

Arie isn't the only lead to include their canine companion in their season. Last year, Bachelorette Rachel took her pup Copper on her journey to find love. He actually broke his toe jumping off something and was in a cast, but that didn't stop him from being by his owner's side the entire time. Copper actually joined Rachel on a one-on-one date with Peter to BarkFest, aka Coachella for dogs. Unfortunately, though, Peter did not win in the end. He was runner-up to Bryan. Some viewers believed that Copper and Bryan wouldn't get along because Bryan himself is not a dog owner.

Despite Bachelor Nation's worries, it seems that Copper and Bryan get along just fine. In an interview with People, Rachel said that Copper loves Bryan: "Copper loves Bryan. He had no choice. If Copper didn’t approve, we would have problems." I totally believe that; Rachel was the first lead in my memory to bring along her pup, so she meant business. She told People, "But he loves Bryan and Bryan loves him. Bryan loves dogs. He wants another one. We’re just one family unit!"

That's good news for Rachel, and I'm betting Arie wants the same outcome with Bastian. From the photos, it looks like all the contestants on the group date have to train a dog on their own. There's a green grass stage and a sign that says "Arie’s Amazing Acrodogs" to boot, according to JustJared. Unlike other Bachelor Nation alums, Arie seemed to go a different way after his time on The Bachelorette. He didn't move to Los Angeles, as many opt to do, and he's also not making a living with Sugar Bear Hair sponsorships.

Rather, Arie is in Scottsdale, Arizona, and while he was a professional race car driver for a time, he's now a real estate agent. He seems to want to live a more quiet life (who knows, this may change), and for him that may include a wife that Bastian loves too. Since Bastian may have been with Arie upwards of 10 years, he's certainly a part of the family. Hopefully, whoever Arie ends up with will get Bastian's seal of approval. For now, I'm excited to see Bastian's Bachelor debut on Monday night.