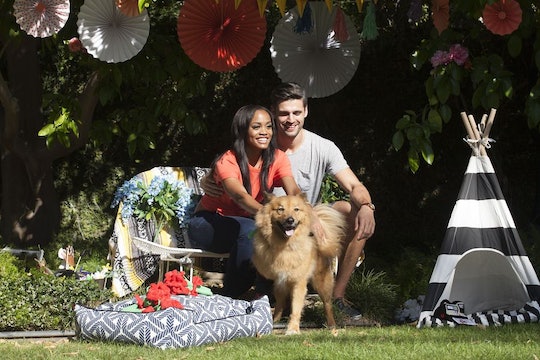 There may have been more than two dozen good looking men on the season premiere of The Bachelorette and still quite a lot left in Week 2, but one of the stars of the episode had to be Rachel’s dog, Copper. To be more accurate, her "dog-child" and best friend. But since this may be the first fans have heard of her dog, how old is Copper on The Bachelorette?

According to Rachel’s first (and so far, only) photo of Copper on her Instagram, Copper is a two-year-old rescue she adopted. And judging by their very close relationship on The Bachelorette, they’re already an inseparable pair. Apparently, the doggy mom had intended to leave Copper at home, but once he injured himself jumping off something in the carefree way dogs tend to do, she flew back right away to bring him to Los Angeles with her.

"I knew I wouldn’t be able to focus on finding love if I left the most important piece of my heart back in Dallas," Rachel wrote on her Bachelorette People.com blog. "So right before the guys showed up I flew back, had his furry leg wrapped in a cast, and booked us both first class seats back to California. Truth is I needed him to comfort me as much as he needed me."

But two year-old Copper, who Rachel guesses to be a Finnish Spitz and German Shepherd, was a quick favorite on The Bachelorette and a welcome third wheel on Rachel and Peter’s first one-on-one date. So if she doesn’t find love with any of the men this season, she’ll always have Copper. Which is really all you need in life, right?

Copper was kind of the perfect tool to figure out if Peter would be the right match for Rachel though. Not only did the pup's presence immediately help you to relax, but Copper brought out a genuine paternal side in Peter that Rachel saw and clearly loved. So can the show be over now and can Rachel just choose Peter already? Because after attending BarkFest together and dancing with Copper like an already married couple and their fur baby, Peter is ranking high up there in my mind.

Since Rachel brought Copper with her to L.A., chances are he’ll be popping back up throughout the season. But fans and even Bachelor Nation alums have very little problem with that, as the dog has already managed to steal so many hearts.

Two-year-old Copper, described by Rachel as her best friend, might not have a final say in who she chooses at the end of the season, but something tells me he’ll be able to help her weed out the bad ones along the way.