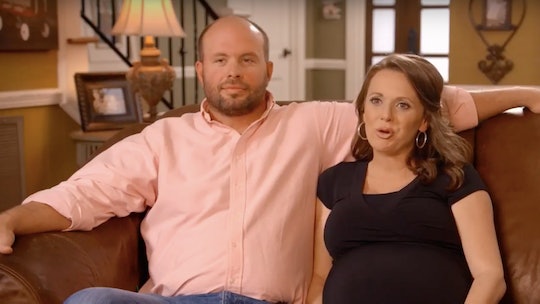 Here's How Old The 'Sextuplets' Patriarch Eric Waldrop Is

Sweet Home Sextuplets is five episodes into its inaugural season, following the Waldrop family as they bring home the first set of sextuplets born in the state of Alabama since 2011. Courtney and Eric Waldrop first met in eighth grade and have basically been a couple ever since, so fans may be wondering: how old is Eric Waldrop? The latest TLC patriarch is just 36, according to FamousBirthdays.com, but already has nine children. In addition to the sextuplets — three boys named Layke Bryars, Blu Wellington, and Tag Bricker, and three girls named Rivers McCall, Rayne McCoy, and Rawlings McClaine — the Waldrops also have three older sons. Saylor is nine, and twin boys Wales and Bridge are six. But from the looks of things, the family has plenty of help on hand to tackle raising their brood.

In addition to enjoying reality TV stardom, Eric co-owns a landscaping business called Robinson & Waldrop Landscape Group in Albertville. He and his co-owner Jeremy Robinson went to high school, community college, and Auburn University together before graduating with degrees in landscape horticulture and launching the business in 2005. After the babies were born, Eric was eager to get back to coaching his six-year-old twins' baseball team, as viewers saw in a recent episode. Unfortunately, his wife Courtney struggled to keep the babies pacified while also giving her full attention to the twins on game day.

Back when the babies were still in the NICU, Eric said in a press conference, according to Today, "When they grow and we’re actually responsible for feeding them and changing them and still taking care of our other three — and trying to work and make money to raise them, that’s when it’s gonna get real." And real it got.

The couple is assisted by a team of round-the-clock volunteers who signed up in shifts to help them take care of the sextuplets 24 hours a day, but it's still a huge challenge. The childcare burden on the family is obviously enormous right now, and Courtney and Eric freely admit that while they have a strong bond, they'd never be able to handle the workload without their community.

Their church also stepped in to fundraise for the family and help offset its costs. Between baby supplies for six and the medical bills for an extremely high-risk pregnancy, the Waldrops were looking at a major financial obstacle. Courtney delivered at 30 weeks, which is pretty standard for such a big set of multiples, but the babies still weighed in at under three pounds each, according to People.

The babies came home a few at a time, but finally, after 72 days, all six of them were cleared for release from the hospital. Some of them continued to be on oxygen at home, but closing in on their first birthdays, the Waldrop sextuplets are all healthy. (Fun fact: their birthday, December 11, is just nine days before dad's!) Of course, their journey is just beginning, but you can keep up with them when Sweet Home Sextuplets airs Tuesday nights on TLC.