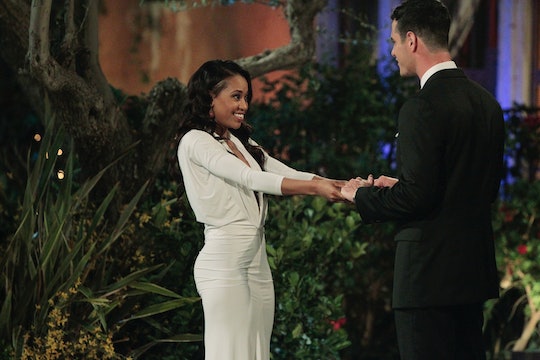 How Old Was Jubilee When She Left Haiti? Her Story Is Heartbreaking

Bachelor viewers learned on episode three that Jubilee Sharpe has had a hard past. It was one of those heart-wrenching moments on The Bachelor, when fans realize the contestants are more than characters on a reality dating show, but actually people with real lives. On her date with Ben Higgins, Jubilee described how she grew up in Haiti but left when she was extremely young due to tragic circumstances. How old was Jubilee when she left Haiti? At just 6 years old, she was adopted by an American family. She shared with Ben that her entire family had been killed in Haiti (the exact circumstances of their deaths aren't clear) and that she suffered survivor's guilt because of it. As fans know, Jubilee left her adopted American family at 18 and enrolled in the army.

From Jubilee's devastating family past to her social anxiety, which she talks about openly on the show, this woman has redefined the meaning of survivor. Not only did she serve her country in the deserts of Afghanistan, she's getting over her crippling social anxiety by competing for love with some high-maintenance ladies (who's going to cause drama now that Lace is gone?) on national TV. Now that's real.

And, it looks like Jubliee's realness is capturing Ben's attention. He called her "strong," on episode three of The Bachelor, and went on to say in a confessional, "Jubilee’s willing to talk about the stuff in life most people aren’t willing to talk about. I know who she is, and I like the person I know."

And fans can't get enough of the Ben-Jubilee connection:

So, I'm a little biased here because I like the gal for being such a survivor, but I hope there are more Ben and Jubilee dates in the future. Just hold the caviar, Ben. Does anyone really like it anyway?