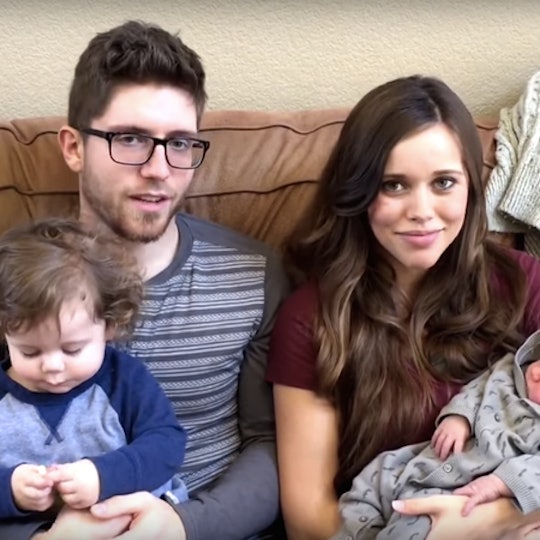 Jessa Seewald, who grew up in front of the world as part of TLC's 19 Kids And Counting, is presently in the throes of marital and mommy bliss. If you've ever checked out Seewald's (maiden name Duggar) social media account, you've been inundated by non-stop, smiling cuteness from her son Spurgeon and husband, Ben Seewald. Now there's new baby Henry Wilberforce to keep fans entertained. The family is moving along at a pretty fast pace, considering how old Jessa Duggar was when she met Ben Seewald. It hasn't been that long since the two began their traditional courtship, arranged through patriarch Jim Bob Duggar, and yet the Seewalds are already at two kids and counting.

Jessa was just 20 years old when she first met 18-year-old Ben Seewald; according to mom Michelle Duggar, he and his family had come to the Duggar's church in Tontitown, Arkansas, from nearby Hot Springs and were invited back to the Duggar home for a little social time after church. Michelle told TLC that Ben and Jim Bob were talking about scripture when Jim Bob said:

You know, you've been bringing up a lot of these truths from the scripture. This is a topic that we've actually been talking about in our home and Jessa has really been studying this very thing. You guys would probably enjoy talking about it. So why don't you text her?

Seewald texted her, and both sets of parents were included in the texting conversations. From there, the young couple moved on to a traditional courtship, as Jim Bob Duggar explained to People:

Courting is getting to know each other in a group setting, both families spending time together and the couple setting goals together to determine if they are meant to marry. With dating, a couple will often pair off alone and that sometimes leads to a more physical relationship.

Jim Bob Duggar kept a pretty tight rein on the courtship, only allowing the couple a "side hug" for 30 seconds or less, according to mom Michelle Duggar:

It should be noted that Jim Bob Duggar handled physical interactions much differently when it came to his own son. Josh Duggar, who admitted to molesting his sister Jessa as well as several other young girls as a young teenager, was never punished, and the statute of limitations has kept him from facing formal charges. Both Josh Duggar and the rest of the Duggar family released a statement when the news broke in 2015, admitting they knew what Josh had done but chose to keep it within the family:

Twelve years ago as a young teenager, I acted inexcusably for which I am extremely sorry and deeply regret. I hurt others, including my family and close friends. I confessed this to my parents who took several steps to help me address the situation. We spoke with the authorities where I confessed my wrongdoing and my parents arranged for me and those affected by my actions to receive counseling. I understood that if I continued down this wrong road that I would end up ruining my life. I sought forgiveness from those I had wronged and asked Christ to forgive me and come into my life. I would do anything to go back to those teen years and take different actions. In my life today, I am so very thankful for God’s grace, mercy and redemption.

Back 12 years ago our family went through one of the most difficult times of our lives. When Josh was a young teenager, he made some very bad mistakes and we were shocked. We had tried to teach him right from wrong. That dark and difficult time caused us to seek God like never before. Even though we would never choose to go through something so terrible, each one of our family members drew closer to God. We pray that as people watch our lives they see that we are not a perfect family. We have challenges and struggles everyday. It is one of the reasons we treasure our faith so much because God’s kindness and goodness and forgiveness are extended to us — even though we are so undeserving. We hope somehow the story of our journey — the good times and the difficult times — cause you to see the kindness of God and learn that He can bring you through anything.

Jessa and Ben Seewald, who now star in TLC's reality show Counting On (after the controversy with Josh Duggar, TLC chose to take 19 Kids And Counting off the air), went on to get engaged in August 2014, according to Us Magazine, and married in the fall of that year. They welcomed first son Spurgeon in 2015, and little Henry Seewald in 2017. It seems as though the couple have moved away from what must have been a troubling start to find happiness.